I've had to manage the Playground all on my lonesome this week, even Parsnip went on strike 'cos he missed Eve :( It's been another busy week with loads of fabulous entries as always. I often have a little smile and wonder if your snippets truly are going down - or are they increasing, like mine?

My card today used up a variety of little snippets, and I even daringly threw some of the waste into the bin rather than snip a little square or rectangle from it to keep for another time: 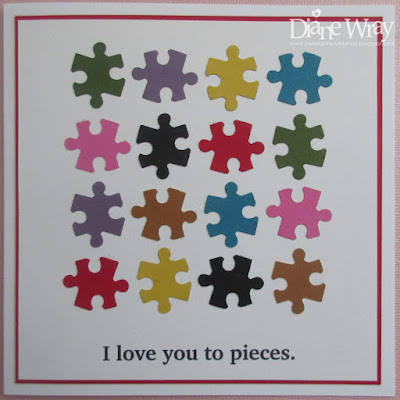 - an A4 sheet of white card stock, onto which I printed the sentiment 'I love you to pieces', towards the bottom - when I trimmed it later, the unused strips were saved of course :)

- eight little snippets of coloured card, from each of which I punched two jigsaw pieces - making 16 in total. I used a Woodware jigsaw piece punch, which is almost 1" at the widest point

- using a very soft pencil I then lightly drew up a grid of 16 boxes above the sentiment, and also drew lines across and down the centre of each box to be sure of precise placement of the 16 jigsaw pieces (that OCD again!), then I glued the jigsaw pieces in place using a 'Zig Squeeze and Roll' glue pen.

- measured and trimmed down the SU 'Real Red' card stock and the white piece of card stock which was now decorated and ready to go. That way I could work out the right measurements to trim them down to - much easier to give oneself a bit of leeway and leave the finite measuring and trimming until the end in this case

- glued the red layer onto the card blank and then rubbed out the pencil lines on the white jigsaw patterned layer (they had helped me with measuring the trimming down, which is why I'd left them). Then glued that layer on top of the red one - both done using Collall All Purpose glue

I did make up the design myself, but I subsequently found loads of on-line fun ways to use jigsaw shapes, I'll be trying a few out over the coming weeks. And, the little jigsaw shapes made by using this super little punch do actually link together really neatly - in fact my first play was to make a solid block of the jigsaw pieces but then I decided to space them apart for this particular card. 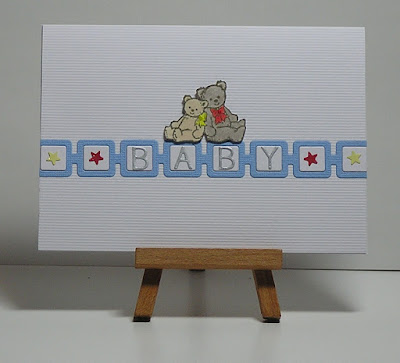 Cathy R made this wonderful card using such lovely MFT dies - and of course plenty of snippets too. I love the simplicity and such a perfect design for a baby with those 'blocks'. 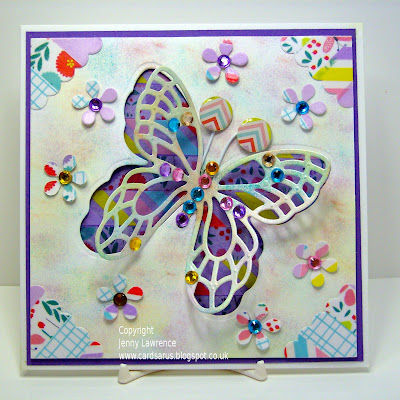 How about this beauty for a riot of the most fabulous jewel-like colours, and of course some jewel like gems as well! Made by Jenny L. 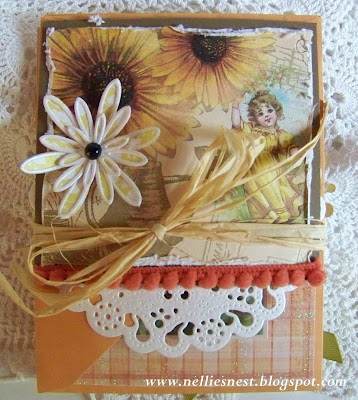 A huge WOW from me when I spotted this fantastic make, brought to the Playground by Diane H. You absolutely must go over to Diane's blog and see all the wonderful detail - plus pointers to show how Diane set about making this gift packet - which she then inserted packets of seeds into for a gardening friend. Brilliant idea! 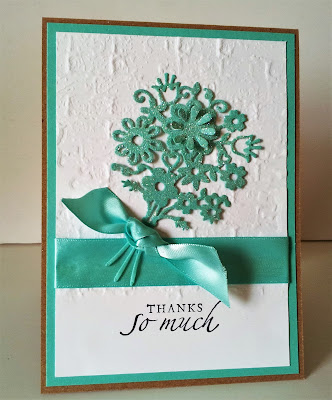 This card is a 'virtual thank you' from Lynn (Lynn's Crafty Corner), for her recent Playground prize. I do so love this die - and the ribbon is such a perfect match don't you think? It was actually a scrap from a package - just shows you should never throw even snippets of ribbon away! 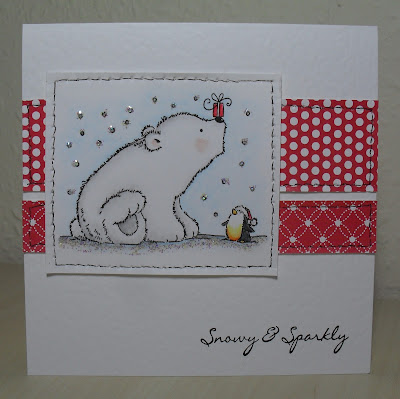 I just love this Christmas card, made by Helen. Great little image and such a clever touch to add the faux stitched snippet strips of paper behind it! Great how the red in the patterned paper really makes the polar bear's little parcel on his nose 'pop'.

Having a little smile here, one of our Playmates has an aversion to penguins on Christmas cards as Santa lives at the North Pole and penguins live at the South Pole (and other places, but not at the North Pole). I'd never stopped to think about that one before. Added to which, quite rightly, she is adamant that the only place that penguins and polar bears would meet is in a zoo :) as polar bears live in the North. So it's possibly a little bit naughty of me to 'light the blue touch paper' - I know that there are quite a few LOTV Christmas images showing both polar bears and penguins together. Tee, hee - I wonder if I ought to send our little Playmate a card using one of them this Christmas :) 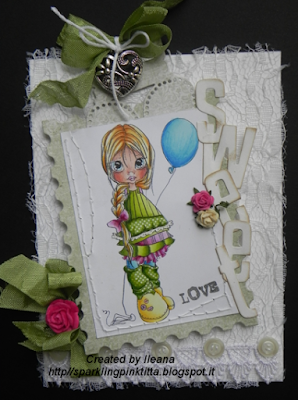 I think this is such a pretty card, made by Ileana. Lots of snippets and some beautiful colouring of the Saturated Canary image. Love how the embellishments (ribbon/flowers) match the image colours perfectly too! 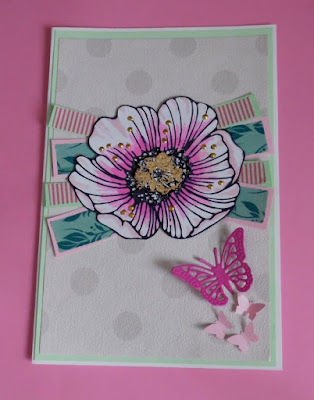 This is another card and a great idea to layer the washi tape onto snippets of card stock and if you look closely at the glorious flower there's some wonderful sparkly gold dots to be seen - love it!

Maura always makes such fabulous cards and this one really caught my eye - isn't the sentiment with the pink flamingo so clever? Lots of snippets of course and a perfect design too. Ahem, and of course this card turned out to be an 'enabler' for me - watch this space :) 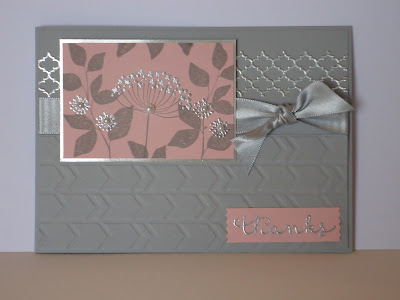 And last, but by no means least, Eve hopped in with this really gorgeous card. So elegant and I adore all the sparkly silver embossing, a card which just exudes style.

Wahoo, nine picks this week - I was ahead of myself during the week writing the basics of this post so had extra time yesterday to include more picks than usual. It's not something I'd have time to do very often though :(

And, we have a new Playmate this week:

It's a young lady named Annie, who is Linda's Grand daughter. We already have one Annie in the Playground so I'll refer to our new Playmate as Pixie Annie - one of her preferred names for the blog she wants to have includes Pixie in the name. Good choice there Pixie Annie, and a really lovely card, love all those flowers and lovely butterflies!

Time now to pick the winner of the Memory Box 'Prim Poppy' die and the Couture Creations 'Compassionate' embossing folder - and the winner is:

Meg
Wahoo, Meg's name came straight out (sometimes I have to run the Random Number Generator more than once if it picks someone who doesn't want to be in the pot for the prize) - and what's even nicer is that this is Meg's first Playground win. She first joined in the Snippets Playground in June 2014, so this was more than due!

I don't have your snail mail address Meg so could you please drop me an email (di_wray@hotmail.com) with it and your prize will be posted off to you this week. Well done - good things come to those who wait :)

And here's the prize for this coming week: 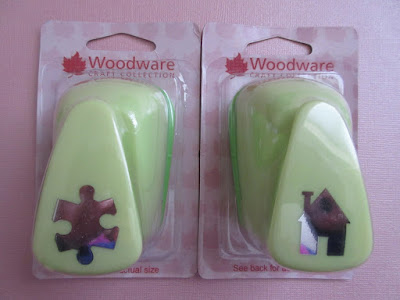 It's two Woodware punches, approximately 1" or so in size, making up the one prize. On the left is a 'Jigsaw' punch and on the right is a 'House' punch. You might well remember the house punch when I went crazy over this fabulous card, made by Liz, the other week: 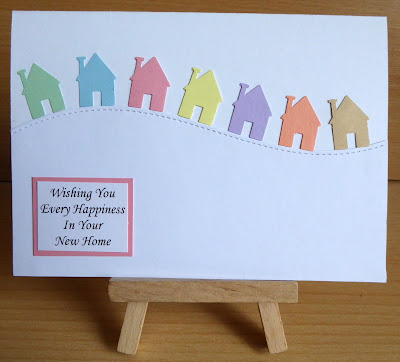 And of course I used my own jigsaw punch on today's card. Both punches have endless possibilities and, even though they aren't exactly lightweight, I will post them to anywhere in the World if the winner happens to live outside the UK.

The Snippets Challenge will run for one week and the Playground gates will close at 11am UK time on Saturday 22nd August. The gates will open again at midnight UK time on the same day.

Maximum of three entries and please say in a comment if you wish to play and be a possible winner of the prize. Also, if you already have one of them or aren't really interested in winning both of the punches but still would like to play for just the one - please say so and if your number is picked as the winner then I'll do a second draw for the other punch.