A Tuesday Tale - The Day the Worm Turned

Apart from the potty bashing as a tot, I was quite a reserved kid - although being sent to boarding school did knock a lot of that out of me :) But, to this day, I can't abide bullies and unfairness.

Before I was despatched off to boarding school we lived in Singapore where for a time, at the age of 10, I was friendly with a girl who lived next door. She was quite small (doesn't poison come in small bottles?) and could swim like a fish - always beating me in competitions. She turned out to be a spiteful little minx so I began to avoid her. My Mum lost count of the times I came home in tears having been pinched, punched and scratched by one Naomi Cameron - yup, I'm gonna name and shame here. She was totally spoilt and could do absolutely no wrong in her parents eyes. Eventually, I was told by Mum and Dad that if I didn't stand up for myself against her I'd be in double trouble at home :( 'Great, a no-win situation here' I thought.

Needless to say, I was waylaid by Naomi a few days later - and this time she had a new tactic. Ever been lashed across the face by a plastic skipping rope? It hurts, BIG TIME. And that's when the worm turned - also BIG TIME. In the monsoon season we had a downpour most afternoons so I'd been sent off, on my way down to see Mary who recently died, carrying a bamboo and sort of 'oiled paper' umbrella like this one (the photo isn't me BTW, I had a short urchin hair cut and generally ran round in shorts and a top!):

Said umbrella was folded/rolled - and the next thing my Mum heard was the most almighty screaming from 'dear little Naomi'. When she rushed out to see what was going on, I'd seen RED and set about her with said umbrella after the face lashing. Both hands had firmly gripped the umbrella and I'd given her a really good hiding :)) Possibly if Mum hadn't rushed out I'd have carried on until the umbrella was totally wrecked :) Of course her Mum also raced out - but guess what, Nasty Naomi got another hiding because the huge weals across my face were pretty self-evident. Wow, a double triumph - finally punished by one of her parents.

The third triumph came a couple of weeks later. It was the school swimming gala and Naomi and I were through to the final race, with about four other 10 year-olds. To this day I really don't know where I found the determination, probably still seething about the lashing, but I swam my heart out, beat her and came first :) Mary and Ken were there with my parents and, along with a load of other parents and their offspring (that kid must have made some enemies), they were screaming and urging me on all the way.

What a sweet victory - and to this day I don't feel one iota of regret for being 'the worm that turned'. So, I can sometimes forget being 'Little Miss Sweetness and Light' and look a bit like this: 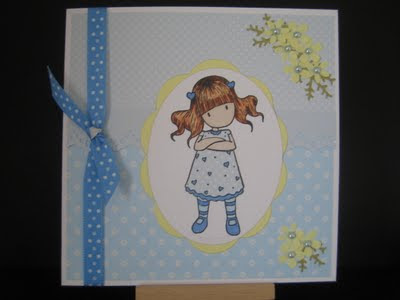 So, watch those skipping ropes in the playground girls :))