As soon as I saw this week's Less Is More challenge, to make a shaped card, I knew what shape I wanted to make at least - a tepee card, which is three sided. Thinking of what to add took more time and in the end I found some La Pashe flowers in the cupboard and made a chrysanthemum (yay, haven't had a long word for ages!) in bold bright orange. The flower and leaves took a lot longer to make than the card - lots of snipping and shaping: 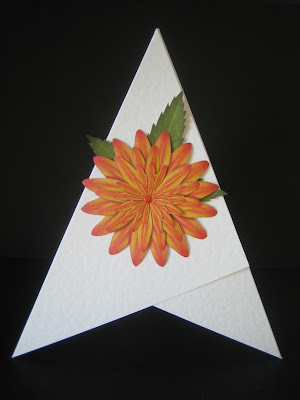 However, it was great fun to make, I made a much more elaborate one a while ago which fastened with ribbon - here's a link to the tutorial I'd followed. And here's a link to the card I made almost a year ago now, which shows you it can be 'more is more' if you wish. But, this time, instead of tying the final side with ribbon as in the tutorial, I had a secret weapon to hand that I've wanted to use for ages:) 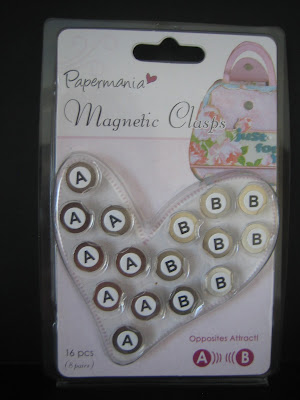 Totally brilliant invention, although not really cheap at £4.29 for 8 pairs I suppose. They're very slim too, here's a side view of one set holding the card as a tepee, just remember to fix one half of the pair and then place its partner on top, remove the sticky cover and fold the other part of the card over onto it - don't try and line them up by eye as I bet that wouldn't have much chance of being totally accurate: 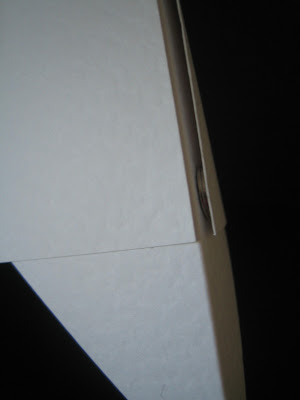 I added a sentiment to one side, and the other side has the same punched shape left blank for any message: 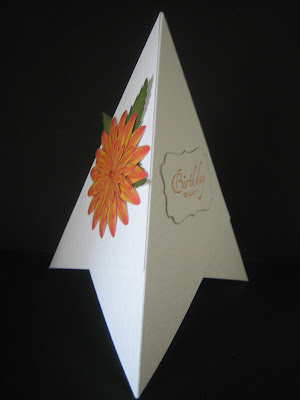 Snigger, it looks 'wonky' but I promise it isn't :)

- 3 squares of 5.5" hammered white card and assembled as in the tutorial link above

- sentiment stamped with stamp from SU's 'Sincere Salutations', in 'Pumpkin Pie', and punched using SU's fabulous 'Decorative Label punch, with some 'Wild Wasabi' run round the edge for definition, the matching, but blank, punched topper on the third side is also edged with 'Wild Wasabi'


A red hot flower, for red hot weather - I'm off to sit in the freezer again!