Black and white and a lot of angst

As soon as I spotted the current challenge over at the Allsorts Challenge Blog which is Black and White, I knew exactly what new toys I wanted to play with.

Yeah right, what a time I had! I'd been itching to use a new set of Spellbinders Dies called 'Moroccan Motif' and after wrecking lots of attempts I nearly lost the will to live here. They are almost impossible to remove from the dies :( I've read that waxed paper is a secret weapon so that's on my shopping list, unless I find some hidden away amongst the baking tins etc. I think that rubbing the dies with a tumble dryer sheet is also an option but I don't have those either. Sooooo disappointing but eventually I came up with something 'passable': 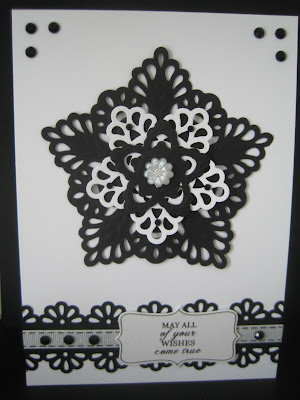 - black card punched using a Martha Stewart Daisy edge punch - ha, that was a walk in the park!

-  white self adhesive ribbon with faux stitching - just a little snippet which doesn't even go right across, but the gap is hidden by a Craftwork Cards sentiment

Snigger, there are some very small black gems on the white die cut layer, to hide some poked marks I made in desperation whilst trying to get the card out of the die :) A lorra stamping of feet here I can tell you!

And, when he saw the result my 'in-house critic' said he thinks black and white is much too funeral like!! Trust me, I could be flicking the landing light off or soaping the shower tray if he doesn't take care :)