The current challenge over at Craftyhazelnut's Christmas Challenge is to use mainly 'red and green'. There might be a fair bit of cream here (although it looks white in the photo) - but the only other colours are red and green: 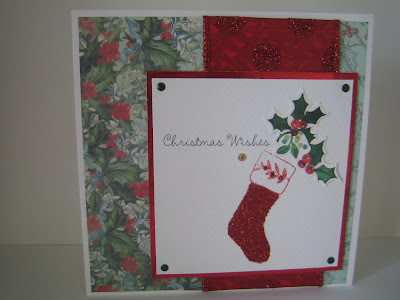 - red mirri card behind the image

- a piece of really wide red glittered organza ribbon, with the wire removed, backed with double sided adhesive film and then mounted onto red holographic shiny metallic paper, which also had a self adhesive backing (a right load of fiddling on for what was otherwise a quick and easy make)

- image cut from a 2011 Christmas card - it does look handmade and I spotted that it's from M&S's hand finished range, I also took note of who sent it so they don't get it back this coming Christmas :)

Another one for the box, and it's less than 10 days until Rudolph Day as well - don't say you haven't had a bit of notice :)