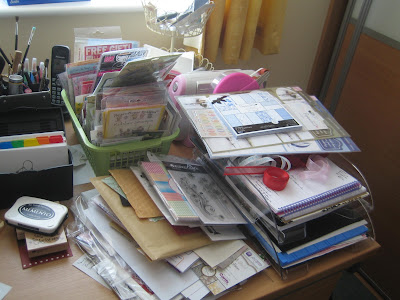 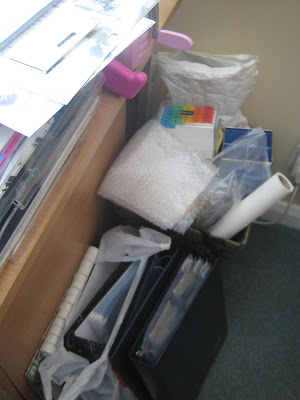 Ooops, some already down there - ahem, so that's where the half done albums of unmounted stamps have been hiding :(

But, there's still a teensy bit of working space left: 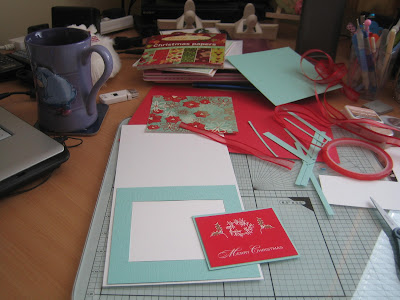 Some serious sorting needed before next Wednesday though, otherwise it could just be an arm waving from underneath a heap of stash!

What is on the desk, in the place where it should be (only available place in fact) is a card in the making - with a great hint that I picked up this week from the lovely Carol (thanks for letting me show and tell!) who comes to play each week in the Snippets Playground. It's one of those ideas that I just know lots of folk will jump in and say 'I already do this' in a slightly smug fashion - but I'm a bit slower than many :)

Basically, what's above is a piece of 6" x 6" turquoise Core'dinations card and instead of cutting into a second fresh piece to layer the image onto (like I've done for many years) - I cut the centre part out of the card so I could use it for the image layer. If you look at Carol's lovely card she did that twice for her Tatty Teddy card, by using dies.

On the card above, my next layer is to be just paper and the square of card I've cut out is larger than the top piece of turquoise card will end up so there would be a potential 'dip' underneath the image as I'm gonna use paper. To counter this I just used a piece of plain white card to 'fill the hole' - mine was cut using a craft knife, if you've cut a die out then just cut an extra one in white card. To hold the 'packing' in place I used sellotape across the back before sticking it to the actual card - it's already stuck in place in the photo. And, I still have the second, uncut square of turquoise card left untouched.

I'm a bit like Carol on this one though, she also wonders if it's a bit mean - but we do both think it's a great way of making special card stock go further. A bit more fiddling than I always have time for, but still a great tip - especially if you make lots of cards for your favourite charities or only have one large enough piece of card to play with in the right colour.

Right, I'm off for a good hop round, do go to our leader Julia's and see what she's up to today - there are some lovely looking WOYWW badges lying on her desk :) I'm hoping she's going to follow through her threat to come to our local Hobbycraft before too long for a joint 'wobble round' and a coffee :) I wonder if the fork and ladders will come along for the outing too? They've been moved so just might be brushing themselves up for a trip!