One of the nicest Teddy Bear quotations that I know is "A bear knows all your secrets - and keeps schtum" (Rosanne Ambrose Brown).

My favourite bear as a child was (and still is, although he's very old and shall we say 'well-loved' now) called Roger. Don't ask why I chose that name :) He was the keeper of all my 'only child' confidences and my very best friend when I was small. As an Army brat I had to get used to practically everything, including most of my toys and books, being packed into crates and sent on to our next move. We only had suitcases to 'tide us over' in between times - and it was often a couple of months before the crates arrived at our new destination. At the age of about five we moved to Germany for the first time and the imminent departure of Roger was preying on my mind. He was a big bear and I couldn't see that there was any option but for him to set off ahead of us.

My Mum quietly came up the stairs one evening to see if I was asleep and heard a little voice having a very serious conversation with Roger, telling him he had to be very brave when he got packed away and sent on a journey - and that I would see him as soon as he arrived. Oh wow, bit of heart string tugging there then and I was quickly reassured that somehow Roger would make the trip with us and not be packed into a dark and scary crate after all. It was like a fairytale come true for me, to this day I wonder if I'd plotted the whole scenario, and I suspect that my Dad might have carried him for at least some of the journey!

So, when Super Sandra sent me some stamped images recently, one seemed to say 'Hello, it's me': 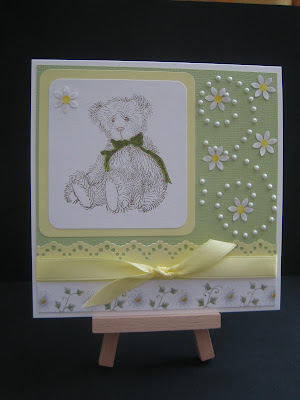 This is my Roger, as he must have looked before he was hugged, squished, had new eyes and new paws and was generally loved to pieces.

The image itself was so beautiful I couldn't bring myself to risk colouring any more than the ribbon green to pull it together with the green ivy along the bottom of the card.

The card is 6" square, topped with lime green Core-dinations card and a punched lacy edge of paper along the bottom. It came free with a magazine yellow with a border on one side and greens on the other side. The ribbon is from my stash and Teddy was layered onto more of the lemon paper - with corners rounded.

I said on WOYWW that I was itching to try out the Bazzill flowers and flourishes templates so out came the self-adhesive pearls. Ha! The pearls were just a gnats whisker too large for the holes - some would stay in place when the template was removed but it was obvious that most wouldn't so I just placed the template where I wanted the pearls to go and put a little pencil dot in each hole. Bingo! That has now lead me to wonder about making some templates of my own from acetate (need that to see where it's being lined up), a pokey tool and a foam mat to put underneath when pricking the design out to make the template. Food for thought at least!

The final touch is a few punched daisies, coloured slightly to match the daisies in the border.

So, there we have Roger the Teddy Bear - and I doubt if I'll be able to part with this card unless I can find that beautiful stamp on my travels around the internet!