Crumbs, it only seems five minutes since it was the last 25th of the month! 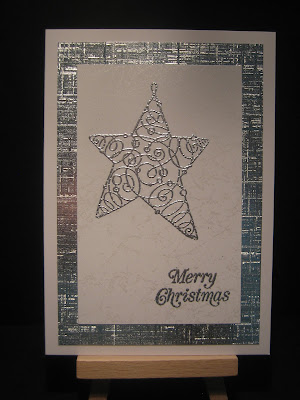 The star stamp has been languishing, un-inked for years! It's called 'Wire Star' by Stampendous dated 2002 - and I wouldn't be surprised if that's as long as I've had it! The sentiment and star were stamped in silver ink and then embossed using Platinum Silver embossing powder onto a background of white card which has the slightest tracings of a silvery crackle pattern. Then layered onto silver linen effect card - I was amazed at how many different tones of silver card I tried before finding this one in my stash - and just popped onto an A6 white card.
My 'in-house' critic saw the card and said 'It's got a wonky leg'!!! Men, they have little or no understanding of such things do they?! Mind you, he's currently nursing a wonky leg as well - from a swift kick on the shin :))
It's busy here today - I have a little surprise to take round to my young friend Abigail in a minute. Her very own Marcel the Monkey :) Secretly adopted after she fell in love with Marvin recently. She's currently on crutches after dislocating her knee, yet again - so hopefully Marcel will cheer her up.
So, for once this is short and sweet!
Di
x
Posted by Di at 12:23