Get well card - and an exploding egg!

Bet the egg's got you thinking :) But firstly - I finished the get well card - you were all so right, walking away and leaving it was a very good idea: 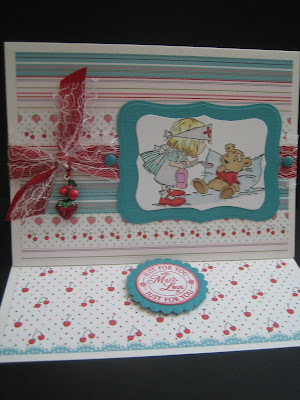 ﻿The image is 'Little Nurse' - one of LOTV's cuties - coloured with Pro Markers. I made my first mistake here - cut the image using a Labels 8 Nestie and then realised I hadn't coloured her hair 'cos I'd been undecided whether she should be a blonde or a brunette. And, of course I went over the outline at the top of her head - no amount of using the blender pen worked so I tried edging the outline right round with a PM as contrast. Humph, it looked awful so out came the little scissors and the whole edging was trimmed off.
The background papers were much too heavy a pattern so I changed track on those - these ones came from a freebie set with Cardmaking and Papercraft magazine ages ago.
Then the ribbon wasn't playing - originally it was turquoise narrower ribbon layered over the red. Looked much too heavy so off that came. The white lacy ribbon seemed much better but then a bit of sticky could be felt so out came the brads. By this point the desk was like a bombsite with all the options that had been discarded and not put away.
It's an easel card and I'd cut a piece of white backing card to hide the wrapped around ribbons and the back of the brads. You know what's coming dontcha?! Yup, I forgot to add that before assembling the card -that was the point at which I gave up and ran away.
However, yesterday I returned to the fray and just added said piece of card to the back - already scored so it folds fine. The charms behaved beautifully, picking up cherries and strawberries in the backing paper. Whoopee - on a roll here - until it was time to add the already stamped (LOTV again) sentiment and the scalloped circle as the final touch. Cries here of 'I don't belieeeeeve it' - just like Victor Meldrew. I miscalculated where it was to go and it ended up off centre! I know that could look deliberate but it just wasn't right at all. Funny enough though, the sticky pads I normally use (from Wilkinsons) are impossible to remove, but yesterday I wanted more height and had used some thicker little square one. Phew - it came of without too much of a murmur and this time I double checked before it was stuck back down. SUCCESS!!!
The card is for a super lady who was one of my Mum's best friends. She's currently in hospital and loves bright and cheerful. If Moira looks in - you know Mary too of course!
We first met in Singapore when I was about 10 years old - and she and Mum were like chalk and cheese. Mum was quite reserved and Mary was - well - madcap! They made a great pair in fact.
If there was something fun to try out - Mary was first in the queue. One day she arrived with her latest scheme - if you pickle an egg in vinegar then the shell softens after a while and you can squeeze it into the neck of a bottle, then the shell hardens once it's dried out. Hey presto - one egg magically inside a bottle.
Mum was sceptical (today's big word) and left us to it in the kitchen - returning to her dressmaking. The egg was left uncooked and popped into a bowl of vinegar - I think that was possibly the first mistake. We couldn't find distilled vinegar so we drained a jar of pickled onions to raid the vinegar. In Singapore the pickled onions came in huge jars and the vinegar was coloured pink - very pretty and I haven't come across them since.
A couple of weeks elapsed and eventually the day for the 'deed' arrived. Mary arrived with an empty wine bottle - are you getting the picture here - this was all taking place in OUR house, she was quite cute. The egg was removed from the vinegar and squeezing began. It was going quite well at first but suddenly, one squeeze too far and the whole egg exploded - showering us and the kitchen with the most revolting pink and green mess. Yup, in that heat the egg had gone rotten. Mum had been watching from the sidelines and her reaction was to smartly close the kitchen door and lock it, with us captured on the inside. 'And you can both stay in there until you clean it all up' came the order from the safety of the opposite side of the door. We were both gasping for breath but also almost doubled up in hysterics. And you know the stupid thing - we meekly did clean everything up and not once did we think to open the back door to either escape or let the smell out!!!
Happy days!
Di
x
Posted by Di at 10:19