Edit: Apologies, I tinkered with this post and for a while the image went missing - all fixed now though!

This week's challenge over at Merry Monday is 'Getting sentimental', where the team want your entry to have the sentiment as a focal image. I went for a lovely swirly script stamp that's a real favourite of mine. Also revisited a fairly similar card I made over two years ago in cream and copper, here's the end result this time round: 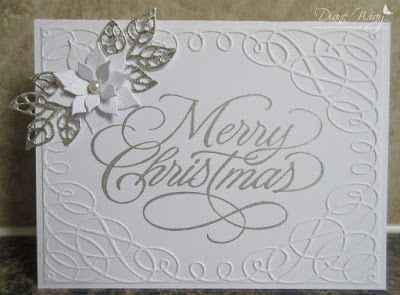 - the embossed background was done next, using a Cuttlebug folder called 'Scrollwork'

- next I stamped the sentiment using an Inkylicious stamp called 'Merry Christmas 004' and a Delicata 'Silvery Shimmer' ink pad. I had thought about embossing the sentiment but the ink pad is so rich and radiant (their words!) that I didn't think it necessary

- glued the skeleton leaves and poinsettia flower in place on the card front, using Glossy Accents and then added a single pearl in the centre, which had been lightly coloured with a silver Pro marker

Did a little batch bake, so that's another three for the box :)