Good grief, Mrs A is working us harder as the weeks go by! This fortnight it's Butterflies + F is for Fancy Folds and/or Fuchsia.

I never seem to have enough time to play with fancy folds these days, and they certainly are my Achilles tendon heel - so I played safe and made a stepper card, which has a few folds in it and it certainly does have fuchsia colours aplenty: 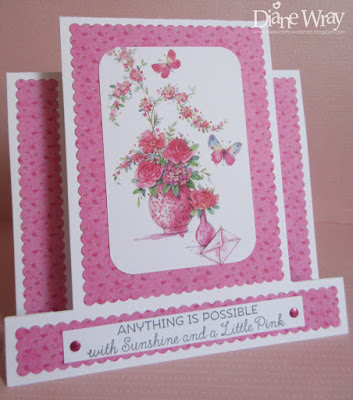 - white card stock, die cut using the Presscut 'Step Card Cutting' die set. A tip with this die, I love it to pieces but it really does pay to use a scoring tool and some sort of score board to further score the lines produced by the die before doing any folding in order to avoid paper fibres tearing at the folds and looking a bit ragged

- then just glued everything to the card base - it's times like this that glue really comes into its own - less chance of stuff being 'on the wonk'- used another sheet of the patterned paper, different design but toning, to line the inside of the card and also added a panel of white card with rounded corners for a message

- final touch, a couple of satin finish fuchsia pink Josy Rose nail heads at each end of the sentiment strip

Just made it in time to join in with Mrs A's challenge - I wonder what fiendish theme she's got cooked up for the next fortnight, sigh.

What a stunning step card, so rich with that beautiful fuchsia color! I love all those wonderful scalloped borders and pretty floral image!

Stupendous Di. I love the stepper card and the design paper is a perfect Fuchsia. That image is one of my all time favourites. We are so going to be crying over the spilt milk when we run out of our hoarded Art Pads. Whoever made the executive decision at LOTV needs a good talking too. As regards the next challenge think I will just go and did a big hole right now and climb in!! Thankyou for fluttering by and meeting all the criteria.
Hugs Mrs A.

Your card is beautiful! Whoever receives it is a lucky gal. Thank you for sharing.

Let's try again !! Always love a stepper card and this one looks very pretty in the shades of summery pink Di.

What a fabulous looking card Di. Love that stepper card in glorious pink and such a pretty focal image and sentiment.

A beautiful card Di. A very sweet image and what a fantastic sentiment. Barbxx

How pretty is this Di and the stepper with the two equal panels each side is the one I really prefer. The paper is a lovely strong pink and tones in perfectly with the LOTV image too and a great sentiment to finish. x

Oh, love so much this stepper card, Di!! So sweet in fuxia!! You have make a card just perfect fot both the themes of Butterfly challenge and really lovely! Fab pad and sentiment, too!
Hugs

Oh Di, this is really pretty. I love the step card and that paper is so soft and pretty. The image is just perfect with the paper and made a stunning card.

Great tip about giving some extra attention to the score lines before folding them. This is a fabulous card! Love the color and your fancy folds!

It's a gorgeous stepper card Di. Love all the pink and LOTV image. I see LOTV have bought back some of the older stamps so fingers crossed they'll do the same with the art pads xx

It was a tough one this week. I got my entry in with 25 minutes to spare! Love your card, much better than mine. Can we swap entries please?! Lol Cara x

Lovely sentiment, Di... and you can't go wrong with fuchsia :)

A real stunner, Di, love all the bright, vibrant colours. This stepper die is so useful. I nearly used mine for my butterfly challenge card this time too, but in the end decided to use a different one instead. I got my card uploaded for the challenge with only 82 minutes to spare! I must remember not to leave it until the last minute next time! x

At least you know how to DO fancy folds, Di, and beautifully!! Even with a die, I'm too fumble-fingered to do anything like this. I love how sweet it is!! Enjoy your day!! Hugs, Darnell xxoo

Lovely image, so pretty and pink. I agree it's so much quicker and easier to make a flat card. But folded ones do look so effective.