It's Rudolph Day over at ScrappyMo's, the last one of the year and the challenge runs until the end of the month (Monday). Two lovely prizes to be won as well!

Plus, another favourite challenge, Merry Monday, is currently running with the theme of  'Blue, white and ... oh NO ... texture'! I literally just spotted that when I nipped over just now to add the challenge link :(

Sigh, I don't think this card will qualify after all - so annoying as I almost dry embossed the letters in the word JOY. That'll teach me to read the brief properly. I know there's texture when you rub your hand over the raised surface created by the large die sitting on the white background - but am not sure that's good enough :( Oh what the heck, I'll link in anyhow - the thought was there!

For my card I used a lovely die that was offered as a Playground prize a couple of months ago. I really do love the die but am realising that there's only so many ways you can use it - perhaps that's why it was on sale (and still is BTW) over at Sizzix. 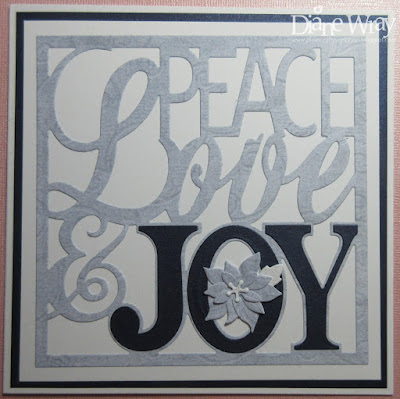 - a smaller snippet of dark blue slightly shimmery paper for the largest frame, glued onto the card front using Collall All Purpose glue

- a snippet of pale blue patterned paper from the LOTV 'Winter Wishes' paper pad, with the back covered with some 'Stick-It adhesive sheet. This was then die cut using the Sizzix card front die I wrote about above, called 'Peace, Love, Joy'

- I've used this die before, and again felt that something was missing so I die cut a poinsettia using a Poppy Stamps 'Small Blooming Poinsettia' die set (given to me by a lovely friend, mwah!) and a snippet of the pale blue paper plus a tiny snippet of white card for the centre and the leaf. Covered all the little pieces with clear Wink of Stella and, when dry, layered the flower onto the card inside the letter 'O' using Glossy Accents as the nozzle is so fine

One more Christmas card to make and the target of 132 over 11 months will have been reached - yay!

Hi Di, what a lovely non-traditionally coloured card, I'm glad I'm not the only one who makes a card and then realises it doesn't meet the challenge requirements, the poinsettia looks like it belongs there so very cute...have a great weekend...Megan

Stunning card, Di. I think that is a fabulous die. Would look great with a snowflake in the letter O too!

Thanks for taking part in the November Rudolph Days. And thanks for the shout out on your post! I really appreciate that.

Good luck in the prize draw.

Hi Mo! My previous effort for the Playground giveaway had a snowflake in the centre of the letter 'o' :-)

Your card is lovely Di. The poinsettia looks perfect. Barbxx

OOH . . . and I meant to say HAPPY RUDOLPH DAY to you . . . head not screwed on properly this morning!

I consider this card textured, because it has uneven surfaces. Isn't that what texture is? It's beautiful, and I love how the word JOY is done in a darker color!

A fab card Di - I love the die and the poinsettia adds the finishing touch.
Kath x

Hehe you made me smile about your card not fitting in the Challenge ....has happened all too often with me too! Now I have started using the program Evernote to keep me in line!
Cheers
Dr Sonia

This large die is certainly spectacular Di and the different colour for the word 'joy' and the added pretty poinsettia looks great. x

Hello Di
I love your very stylish card and thank you for that link - my finger is on the button!
So glad to hear that your trotter is not broken and hopefully things will keep improving - I will keep my fingers and toes crossed for you!!
Eve xx
BTW - 132 cards - WOW!!

Lovely card, and the JOY word in pale blue looks great with the pretty poinsettia!

A super card Di, I love the die cut front and the contrast colour for the word Joy looks great.
Jean x

You really do get a prize from me for being SO dedicated to making CCs all year long, Di! That prize is my admiration and respect! Now if only next year I can stick to my "WWDD" inspiration, I'll not be in a pickle like I am this year! Your card is perfect for a CC, as far as I'm concerned. I wouldn't mind getting this same design year after year, maybe just in different colors each year?! Simple, yet with a great message AND TEXTURE, plus easy to mail! Whoop!! Enjoy your day!! Hugs, Darnell

Awesome card Di! So very, very classy, love it! Wow I know I could not create that many in a year - that is one heck of an achievement Miss: I doff my hat to you Karen xx

Brilliant card Di and lets hope we get all those sentiments not only this Christmas but for 2016.

Gorgeous Miss.
I would let it pass!!
Hugs
xx

I see texture here, Di! Love that die cut and how you used it and the contrasting Joy and poinsettia are so pretty! Thanks for sharing this with us at Merry Monday!

This is lovely, Di :)
Your extra details make a world of difference and create love,y cards :)

Love your super card Di and the poinsettia finishes it perfectly. Great die... just a thought, could it be used as the front to a shaker card (if you understand what I mean)

I agree with Bonnie. There is texture in the die cut. Very pretty. Thanks for playing with us this week at Merry Monday.

Beautiful, Di! I really love how you added the little poinsettia!

You are right Di. A design like that has its limitations, but you have done a great job with it here. I like the contrast lettering and the poinsettia was just what it needed. Kate x

Lovely card, Thank you for joining us for Merry Monday.

Gorgeous Di. I'm sure there's enough texture for the challenge with the die cut and poinsettia.

A very elegant and Classy card Di! I love it! I am way behind you with just forty cards made, but that is about all we need, so apart from special family ones, I have finished...until a friend pops round and asks to look through my box, lol!

It's a pretty die, and is very elegant & classy the way you've selected the colors to go over the white background. Hope it worked ok for all your challenges. Loved the poinsettia tucked in with the darker shade of the Joy! Well done. TFS & Hugs.