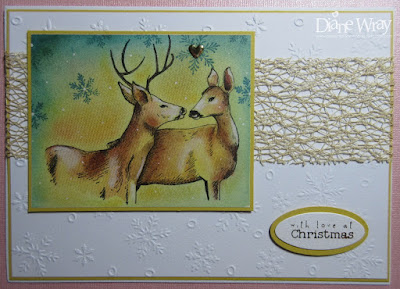 So simple and so pretty!

This is so fun with that mesh and tiny heart! I love the pretty embossing with the Hello Honey colors too!

Super Reindeer card Di, Stickeroos do make lovely cards and are the one exception to stamping accepted at PB&M challenge (where our theme is Christmas - hint, hint, nod, nod !!). The strip of hessian blends very nicely as well.

What a lovely PB stickeroo Di and so prettily backed by the snowflake embossing and the netting and I adore the nailhead heart. x

Gorgous card Di and a brilliant combo of embossed card with the netting ribbon and super Stickeroo. Will definitely have to get myself some of those xx

ps. So glad it made you smile. Just make sure you take it easy and get right before christmas arrives xx

Brilliant card Di, I have a few of these PB stickers too ...somewhere...
Enjoy your weekend.xx
{ aNNie}

Awww this is so pretty Di l love the image it's just the cutest card ever and l love the heart too! x

That mesh adds such a great touch of texture to the card.

Oh, such a lovely card! The couple of reindeer is adorable and the strip of hessian looks wonderful!

Everything goes together most spiffingly. Hugs Mrs A.

What a gorgeous image Miss. Love these reindeer!
So when is the next Nativity Play practice then?
Hugs
x

What a lovely reindeer image this is, and my favourite snowflake embossing folder too. A beautiful card Di.
Jean x

We must be PB's Stickeroos biggest fans, Di. They make great cards and yours is no exception - love those reindeer and the wee heart you've added is pure genius :) Hugs, Elizabeth xx

this is such a pretty card di and it's a fabulous stickeroo! thank you so much for playing along with us at penny black and more!
linda

Love these reindeer and they look so happy together. I must say I'd forgotten about PB stickeroos so might investigate acquiring some.

Love this sweet Stickeroo and you've paired it with the perfect sentiment! Lots of wonderful texture on this card too! Thanks for sharing it with us at Merry Monday!

Gorgeous - I love the finishing touch of that tiny heart. Really sorry to hear the latest instalment of the foot saga, if only we weren't off on holiday in a few days I'd offer to be a prefect at the playground for a while, as I'm sure you have other things on your mind right now!
Jane

The texture on this card is phenomenal, Di!! And those two deer kissing just melted my heart! Awesome card!! Hugs, Darnell

Beautiful...the "sticker" looks so fabulous with the embossing and that incredible ribbon. Love this card.

Lovely card with all that great texture. Thanks for joining us this week at Merry Monday.

Great card Di, love all the different textures on it.

Lovely design,Thank you for joining us for Merry Monday.

Very pretty card! Love that image....thanks for joining us this week at Merry Monday!

Lovely card!
Thank you for sharing at Penny Black and More Challenge;-))m

This is fab, love the design and textures.
Thanks for sharing with us at Penny Black & More this month.
Lynn x
DT

How did I miss this card with the two little cuties and their love heart. The mesh is a great addition too. Barbxx

Such a great, elegant card! Congrats on your win at PB&More!

Well I must have missed this one, it is fabulous and congratulations on being a winner at PB and More at Allsorts, well deserved.