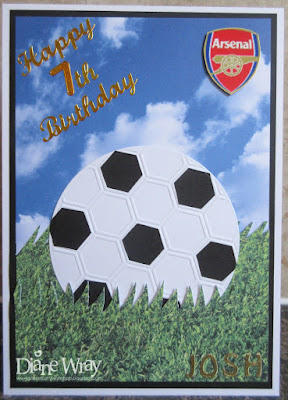 The Gunner fan would have loved the card. Lovely card

Lovely card Di.Good use of the embossing folder.

A great card Di and I'm glad you got your printer sorted!
Kath x

This is a great card Di and your little neighbour will have been thrilled with this I'm sure. I love the dps with the clouds and grass and a fantastic idea to use the hexagon ef to create the football. x

BRILLIANT use of the hexagonal ef . . . terrific boys card Di. Love the in-house critic's pun. Does that make hima pun-DIT???????

Snort! I'd say you're on the ball yourself there Sarn! :)

Thank goodness for having a few cards made and posts in draft for once, there would be a loud silence from here otherwise right now!

Very cool use of the honeycomb embossing folder. It's nice to think outside the ball, er, box.

I hope you and Len have a wonderful weekend!

The your little neighbour will be on the moon with this card! You have made a great use of the exagon embossing folder, this card is so creative!

Such a clever card Di....I giggled at the printer story. .glad you got it sorted. Technology has hissy fits at the worse times! Enjoy the weekend hugs xx

A bit of a marathon it seems but well worth it for the fabulous result, good tip for the use of the SU E.F.
Hope you've got your sofa back, thought at one point Sarn was going to throw it on the fire.

Get well soon, and even sooner than that.

You really were on the ball with this like he said! So lifelike and cute. I know the little boy will love it too!
Lynn

What a clever use of that hexagon embossing folder! The soccer ball is really fun and I'm sure that little man will get a kick out of it too! Oops, there's another pun for you :)

What a great idea to nestle the ball in the grass like you did!

Just catching up Di on your fab makes! I have a lot of catching up to do and I must try to get back into the snippets challenge:) but I'm getting there slowly..lots of huggles Sue xx

You nailed this. Fantastic design. Who says you can't make cards for boys/men???

How funny--puns are especially fun when they just come out unintended! Brilliant card--so creative & perfect for a boy!