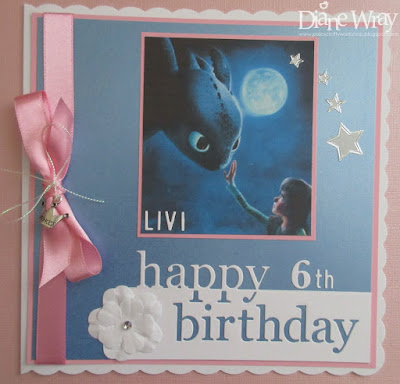 Very pretty card Di, and thanks for the idea on making neat bows!

So sweet it looks Di. My daughter had gone through a bat man spider man phase when she was a toddler and for weeks she would be dressed up as superheroes! People didnt believe she was a girl!

This is gorgeous, Di :)
Doesn't EVERYBODY like Toothless? (We have the DVD's)!!!

Aww this is perfect for your Livi Di......I haven't heard of Toothless! She will love her special card from you x

I am sure Livi - although Olivia is such a pretty name, we have an Annabel who insists on being call Annie - will love the pretty card you have made for her Di.

Just read how you made your bow, not sure if this will help but when I do one round the card like that I use a tiny piece of the red line tape to hold the ribbon join and you can also scrunch it up so that when you add a bow it looks like it's been tied from the same length of ribbon. Does that make sense, not sure !

The TL bow makers are excellent, I was always happy with my bows until TL sent me a couple and the options are endless for fancy, tripe and so on bows. That's how my 'system' above came into being as I wanted the ribbon to look as though it was one with the added bow.

Think I better be quiet before I am as confused as I have probably made you by now.

Can I have card like this for MY birthday please????? I absolutely LOVE "How to tame your Dragon" . . . one of my fave animated films. Toothless ROOLS!

I have not come acrosss Toothless before but I don't have grandchildren so that is probably why. This is such a lovely card Di and the ribbon looks splendid and having the bow lie vertically is much nicer and more natural looking. I'm sure Livi will have been over the moon with this! x

Hi Di, how funny, it's been ages since I had a peek on your blogg, but found this today :o))
You should have seen Livis little face, she was totally amazed about her Toothless card. It is so fabulous, gorgeous - GREAT!. Big hugs and thanks a lot for your fantastic work and idea - also we still have decorated your Halloween card here - also so lovely :o))

Toothless is the cute dragon of Dragon Trainer, it's right? I love soooo much this film!
I have the dvd and I have seen it with my niece :D Your card is adorable! Just perfect for your grand daughter Livis!!

What a lovely enchanting card for your little grand daughter, the blue and pink colour palette is so pretty.
A great idea for tying the bow in the ribbon. Thanks for sharing it, I will certainly give it a go.
Jean x

Gorgeous card in blue and pink, I'm sure Livi loved it! Thanks for the instructions for tying the bow, I'll have to give it a go.

I've never heard of Toothless the Dragon. Off to check it out on Google........ xx