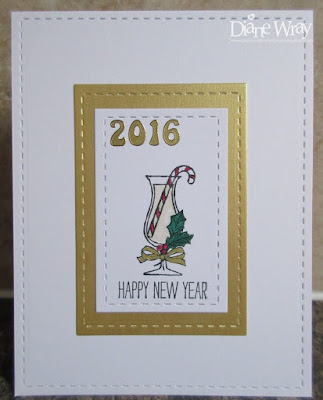 A great card Di - lovely stamp too. Glad there is some good foot news - hope the improvement continues.
Kath x

Pre loved sets are a real blessing when a set of SU stamps retires... I know I've procured several sets that way!
I agree... a lovely image. And it works so well.
Take care. x

A great card and I love the festive cocktail image. You're right, it's always useful to have cards ready, just in case you need them at the last minute. I'm pleased to hear that your foot's on the mend x

That's the spirit Miss (glass half FULL attitude). Love it. Shame about the toe/foot still giving you gip . . . but sounds like it's decided to get better after all!

A great idea to make a new year card which I'm sure will come in handy Di and which fits the challenge perfectly and I love that festive cocktail which looks great with the white and gold stitched mats. I hope the pain in your toe continues to ease too. x

Very elegant card for the new year!! Beautiful work!
The new year is coming quickly... I must hurry! :(

Glad that you have at least got the results from the doctor. Good news that you trotter is showing some signs of improvement. :-)

Awesome card Di! I love the gold, so festive!

Great thinking Batman!! Well at least you have an answer now so can treat accordingly. Hugs Mrs A.

Glad to know Di there is some improvement but don't over do it as we do ...your card is gorgeous as always......sending lots of love x

Just sheer perfection Di, great image, super CAS and fantastic take on the challenge! thanks so much for playing along this week!
Sarah xx
Less is More

A lovely card and clever thinking for the numbers. I love that image too. Glad it was good news from the doc and hope your foot continues to feel better. Barbxx

Don't you just love it when you find a well-loved stamp set you've wanted? I love what you've done with this set, and what a clever idea to have New Year cards on hand! You're so far ahead of the game by doing this and the coloring is great on this cute little card! So happy the news is good and you're getting around better these days. Mr Arthur Itis already lives in my house, so I hear you loud and clear!

Simple and super Di!
Great card!
Thanks so much
Chrissie
"Less is More"

Very stylish card Di and love your new stash!
Take it easy on that tootsie
Thank you for playing along at "Less is More" this week
Anne
"Less is More"

What a fab image for a new year card, so glad you got your hands on it. And I just love all the stitched frames layered like this. Gorgeously crisp and clean.
Thanks for sharing with us.
Anita x
Less is More