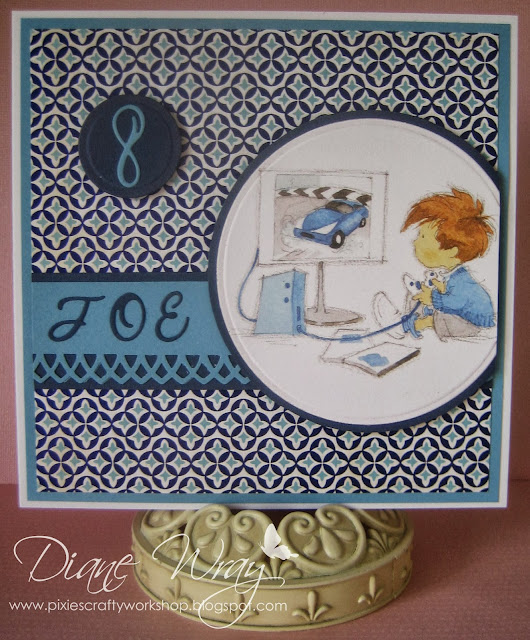 I was the very last minute getting a card done for my grandson. It wasn't nearly this cute and I didn't even have time to get a photo!

I like that look of the die partway off the page!
Great job for a woman on a mission to post it...i bet he loved it as it is a wonderful card! Great colours and a great image too!

I forgot to take a picture of the card I made Little Miss C for her Birthday last week. Luckily i can bring my camera tomorrow and take a quick photo after school.

We are off to drive by houses for sale in Langley tomorrow.DH still says he is not ready to downsize...but I have scouted out a few likely candidates and plan to drag him by the outsides...prolly find they are behind power lines or Lord knows what all...but if you don't at least look, you will never know...right???

Nice arrangement of the pieces Di, and a perfect image for a young boy. Kate x

Lovely card Di, the cut off die cut is very cool and really adds to the card. I chuckled too when you said belly band and the image in my mind was so different to card making lol. Hope you are having a wonderful holiday. Hugs, Amanda x

Super cute card for a little guy, and I love the color scheme! Great image, so perfect for a young lad :)

This is super Di - I do admire crafters who can make quick cards like this one. What a sweet little image and the backing paper is brilliant. I have just about stopped laughing at the belly band - I sometimes wish my imagination wasn't sooo vivid!

Hope you are both well.

Great card Miss. I have a two toned pink DP by Sally Moret that is spookily very like your backing paper. I got it out just to check.
Tell me about those alphabets! I also bought the lower case set. It was like an Einstein puzzle. Not only were they NOT in order on the die cast but some of them were upside down. The only way I could work it out was die cut out and to paste them onto a sheet of card in the right order and do by sheer elimination!! I needed to go and lie down after that in a dark room!! Hugs Mrs A.

Gorgeous card Di. Love the background paper, and you have co-ordinated the colours so well. Enjoy the rest of your holiday. Lynn x

A gorgeous birthday card!
Love that image and the dies.
Hugs xx

Oh, great boy's card. Wow for you getting it done so rapidly too, and it turned out beautifully. He'll love this handmade card! Thx for the heads up on the alphabet set. I had drooled over it. Glad I got the word on it, and I see Mrs. A also had difficulties. If you 2 experts have problems, I _know_ I would!!! TFS & hugs.

Brilliant last minute card, it would have taken me all day to come up with something and I'd have missed the post.

Hi Di, l just adore these pre-coloured images they are a life saver when you need to make a quick card and your card is gorgeous Di Joe will adore it xx