Light up the Snippets Playground!

It's time to have the Grand Switch on of the Christmas lights in the Snippets Playground. Do hop over to take a peek - HERE - at 7:30 pm UK time - this evening!

I made a Christmas card in keeping with the lights theme: 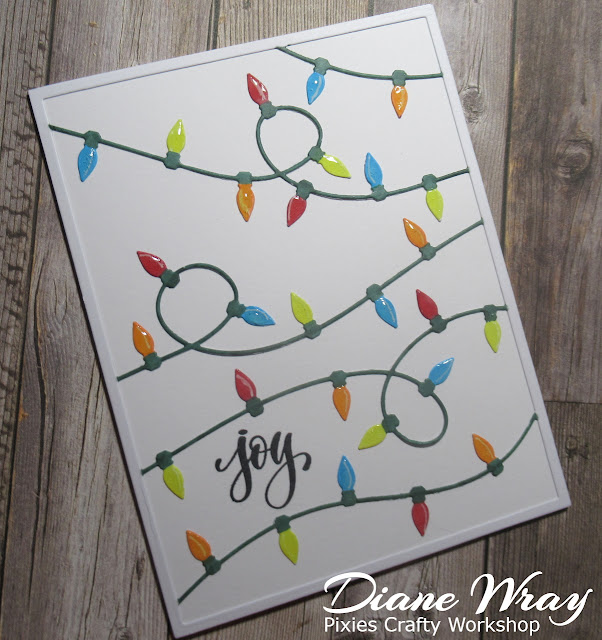 - bit of fiddling around with the die cut and Misti to line up the stamp with the string of lights, before removing the die cut then stamping the sentiment onto the card front using Memento 'Tuxedo Black' ink

- added the die cut to the card front, using a glue pen on the frame and the lights - the 'cable' just sat in place nicely - apart from one little curl which ! popped down with a teeny dot of glue

Got a shock when I realised that this die came out in 2014! I bought it during 2022 and it was in my Christmas NBUS basket. There's a sample card made for Poppy Stamps over on their blog, which I followed - mostly for speed. One could snip the strings of lights from the frame and use them in several other ways of course.

And, being stupid, I made two the same when really time wasn't on my side!

Dudley is already really excited about this evening, having helped Sarn and I to do the decorating - he seems to be anticipating a few savoury nibbles as I've baked us all a tray full of sausage rolls plus a tray of cheese straws, to go with the mince pies. Dried fruits aren't good for pooches so no mince pie for him - all the more for us then!

It STILL beats me how Sarn and Dudley managed to manhandle (or should that be 'woman and dog handle') their (ahem) acquired Christmas tree back from the farm to the Playground! I worry that we'll hear that a tractor also went missing! Last seen on CCTV being driven by the tall, slim one wearing black and a balacava - with the little one also in black but with a white fluffy tail, also wearing a balaclava. The farmer swears he heard someone singing 'Oh Christmas Tree' around the time of the CCTV footage!