The current Challenge #67 over at Christmas Kickstart has a lovely theme - 'Poinsettias and Posies'. I finally found time to make a couple of cards, exactly the same, as my entry. Here's one of them: 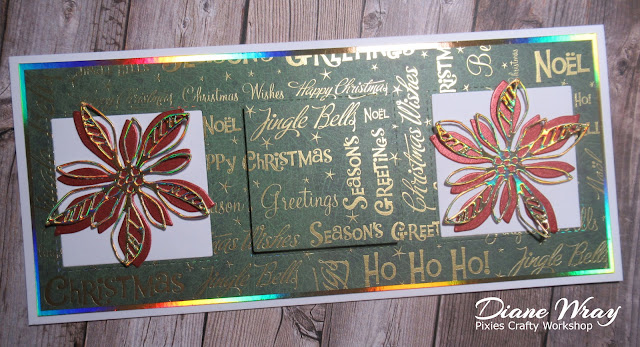 - dug out a couple of identical pieces of very old patterned paper by Craft Creations called 'old Christmas Wording on Green Texture' and trimmed them down to 8" x 3.25"

- ran a gold Calligraphy pen around the edge of the square of white card waste I'd set aside a couple of steps back and glued it and the 'set aside' patterned centre square's waste together, then added it onto the centre aperture using 2mm thick large sticky pads. The gold edge was really so that, from the side, the edges of the square wouldn't look stark white - and it works well. I initially had tried just having it flush to the rest of the card front but raising it on foam pads really made such a difference

- in fairness, I made the poinsettias right at the start of making the card as i wasn't sure if the aperture's would be the right size etc.

- then glued the slightly offset gold layers on top of the red ones, before finally adding them to the card front

- finished - another two for the box!

The patterned paper that I used is so lovely in real life (I also have some in deep blue as well as in rich deep red) - the 'information strip as most 12" x  12" papers  do bear, shows that the design goes back to 2008! And that was in the days when I bought a lot of my stuff from Craft Creations. You chose from either a paper catalogue or a very clunky online 'shop' - and then submitted your order on a paper order form, which you posted off with a cheque for the relevant amount. It all seems rather pre-historic now. ☺

One lesson I learnt is that the 'stitched edge' to the three apertures doesn't show up well on dark quite heavily patterned paper. However, the die will be really great on plain paper and card of course - plus it guarantees that all three squares are lined up properly!

I'd also like to enter my card into Darnell's NBUS Challenge #43. The poinsettia dies and also the MFT 'Slimline Stitched Square Trio' die had their first outing.

No news to report from Dudley. Right now he's cuddled up on our bed with Honka Duck (still the same old duck, bad mistake to let him see the old one after we'd hidden it and given him a new one). With all this wet weather, which he hates, it's not been easy shoe-horning him out into the garden to go toilet - just before bed in particular. He seems to have magnets built into his paws and rear end and you just can't budge him! Len has had to physically lift him outside - whereupon he then wees for England (Dudley not Len!) - which shows that he would have been pestering to go out in the early hours of the morning - little tinker!

A little message for those to whom I promised to send decorative flowers and such during my proposed 'sort out' session. Basically I hit a mobility problem as well as a nasty leg infection so they are still on hold, for now. Don't give up - I will get there, I have your addresses and .... I need the space!

There's a new post over in The Snippets playground, with the results of Challenge #438 - HERE.