Yesterday was Len's Birthday - and Dudley commissioned a card for his beloved 'Dad' from me: 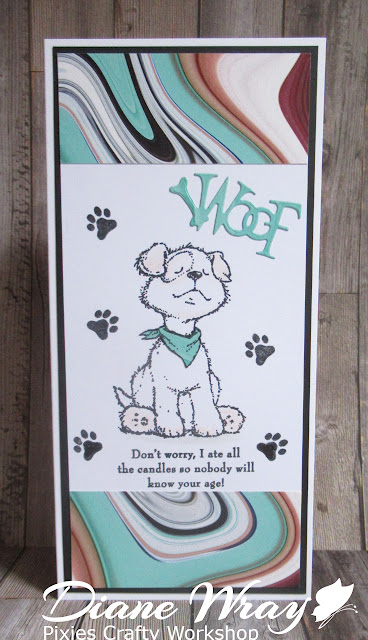 - snippet of black card, trimmed to a bit smaller than the card front and glued in place

- another snippet, this time of white card, trimmed to a bit smaller than the black layer

- then dug out my Altenew 'Poured Acrylic' paper pack and cut into a whole new sheet! Basically to add one and a half inch bands across the top and bottom of the white panel

- then used Memento 'Tuxedo Black' ink to stamp the fun sentiment ('Don't worry, I ate all the candles so nobody will know your age!') and the adorable pooch onto the white panel - his ears, eyelids and the pads of his paws were coloured pale peach using a Polychromos pencil. However the light when I took the photo has almost faded them - but they're there, trust me!

- stamped the pooch's bandana onto a tiny scrap of the turquoise part of 'Poured Acrylic' paper, fussy cut it and ran a new black 'Tombow Brush Pen' around the edges to hide any potential white edges from showing. After over 15 years of use, my black Whispers brush pen finally dried up/ran out of ink - it was the most used of the set of 36 markers and owed me nothing

- glued the turquoise bandana in place onto the pooch (now looking very much like Dudley in trouble!) using a glue pen

- however, the 'white space' was too stark with a mainly white dog - so I used a small paw print stamp by 'Fun stamps' and black ink to add some extra interest

- now it was finished!

I went bonkers with the little paw print stamp on the envelope, a gift tag, the inside of the card under Dudley's 'signature', and even on the back of the card besides the words 'Commissioned by Dudley'!

I'd like to enter this card into Darnell's NBUS Challenge #43 HERE' The NBUS is the Penny Black stamps set - oh, and the little 'Woof!' die as well!

And, this card also qualifies for this week's Allsorts Challenge #698 over HERE - hooray! So many weeks I just don't get the chance to join in, so it's great when the week's Allsorts theme works in my favour! The theme is 'Add a sentiment'- and I think the cute little sentiment voicing the pooch's 'don't blame me' trip fits the bill very well!

Len loved his card from Dudley - and, even though I cheated and bought a ready made laser cut 'sailing schooner 3D card' from me (time was not on my side) - he was really pleased with that too. A few other lovely cards and of course pressies from Dudley and myself - a happy day! Nice evening meal - worked well.

The week has been busy with bits and bobs so we only managed one excursion on Tuesday with the 'Purple Peril' - which some of you rightly guessed is a wonderful purple mobility scooter! The feeling of freedom is incredible.

Thursday was my COVID vaccination day, in town. I was lucky and had both the COVID as well as the flu vaccination - one in each arm. Yay! So far so good - a bit tender but nothing to be concerned about.

Dudley was there outside the 'Health Hub' in the shopping Mall and he waited with Len whilst I disappeared to be 'dealt with'. He was SO good - he just watched everything going on round about him and kept close to his Buddy Len. Dudley is such a curious dog - always interested in what's going on and I think the outing to somewhere totally new and quite busy really stimulated him. Without even trying, he really charmed loads of people as well. It's only recently that 'non-assistance' dogs have been allowed into the shopping Mall, we didn't see anything untoward so there's a chance that the move won't be reversed. Obviously not all shops will allow them inside but for us it's a great step forward.

Sarn (and I) work hard to make Playground a fun place - and, to that end Sarn has opened up a new Snippets Playground challenge HERE.

Also a little heads up that in two weeks time so NOT just yet girls. I'll be hosting a new challenge on 30th October. We don't often have 'themes' but we will be looking for Autumn, Halloween and/or the associated colours in your entries for the challenge that opens 30th October ................. not just yet, I'm just giving you some advance warning so you can plan ahead! It's not mandatory but would be fun we think!

With love, from Di and Dudley