Having a little rummage turned up the makings for two identical Christmas cards. I found two Forever Friends Christmas teddy tags along with some snippets of red patterned paper - stored together in a cello bag, I'd obviously paired the image and the snippets at some point - and this is what I made: 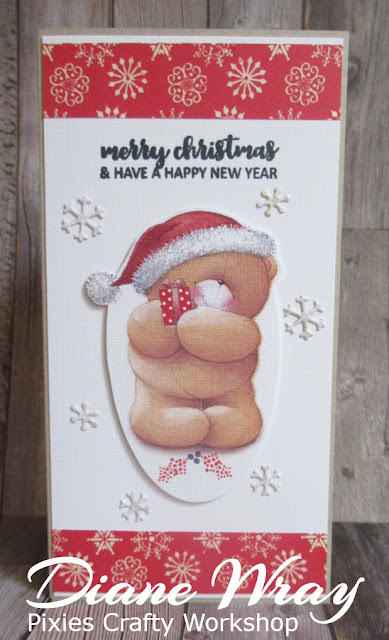 - the snippets of red patterned paper, trimmed and added as borders to the top and bottom on the panel of white card

- glued the panel to the card front

- added the bear tag using thin sticky pads, thankfully it didn't have a hole punched for twine. I vaguely recall it coming with a roll of matching Christmas paper many years ago

- then die cut a few snowflakes using a Penny Black 'Snow Family' die to die cut a selection of flakes from the leftover card used for the card blank, then tickled them with Clear Wink of Stella on a scrap of paper and left them to dry

Two more cards for the box!

Len had his COVID booster earlier in the week, he felt one degree under for the following day but it only lasted for 24 hours and was nothing like he's reacted previously. Mine was booked for today (Sunday) but is now postponed until the middle of October.

Dudley Pupdate: We managed to swap Dudley's old Honka Duck for a new one, then Len, in a daft moment, showed him the old one. So right now Dudley has both of the ducks - and the new one is decidedly neglected whilst he never lets his old favourite out of his sight! So, I'll have to wait until he's asleep and hide the old one again! On Thursday he had a bath/shower and all three of us had a good soaking, perhaps revenge for the duck swop?!

There's a new challenge over in the Snippets Playground HERE. Hope you manage to join in!