Huge congratulations to Brenda and her lovely Design Team - 13 years of the Allsorts Challenge - phew! One of my favourite challenges and a great place to find stimulation and ideas.

The theme this week is 'Anything for a Birthday' and I sat working until quite late yesterday evening, determined to join in the fun. This is what I made, two cards very similar to one another - just reversed the colour of the big die cut word: 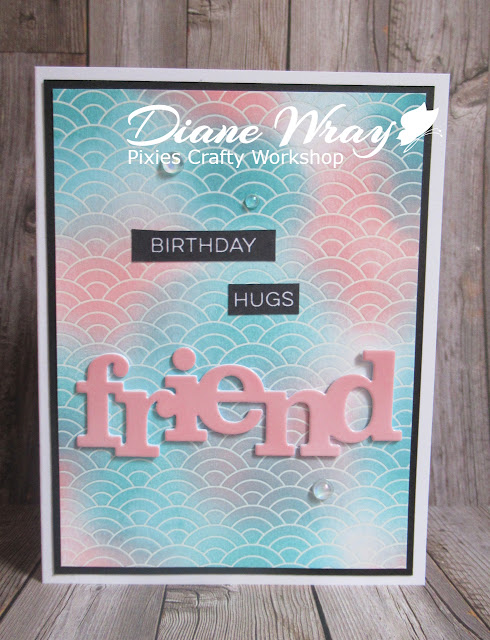 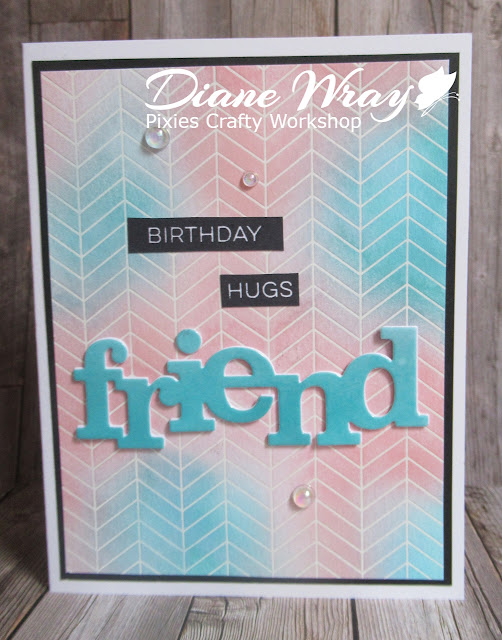 - at the same time I coloured a couple of white card snippets all over using each of the same Distress Oxide colours ........ I had a leetle  plan in mind!

- next, thanks to an idea from Ann Melvin, I laminated both pieces of the plain Distress Oxide colored card - on the front only. So easy to do when you know how - just back the whole area where the card pieces are place in a laminating folder with copy paper or similar. The backs of the coloured pieces of card are then left unlaminated when you cut the laminating pouch open to reveal the contents - simples and also really easy to glue onto your work! Hint from Ann - don't laminate the back and front - your die cutting machine won't cut cleanly through the back layer

- then I die cut the laminated word 'friend' for each card using a die by Winnie and Walter called 'In A Word: Friend Cutaway'- and it comes out looking just as if you'd coated it in Glossy Accents, wahoo!! ☺

- finally, added three 'Bubbles' embellishments to each card - and called them done

The Ann Melvin demo in the link above uses strips of washi tape and I've also seen another version where she laminated plain coloured card. The Glossy Accents effect really is gorgeous in real life. Not seen her laminating Distress Oxide coloured card as I did - but to be honest, any flat paper or card would work fine as far as I can see. And if you want to economise, then place your card pieces to be laminated face down on either side of the pouch with two sheets of paper in between! I promise it will make more sense if you spend five minutes watching Ann's video.

One thing I tried that didn't work was to laminate the MFT words and then fussy cut them. I think it's the action of the scissors on small pieces but they were just going to peel apart from the lamination covering - luckily I'd had my doubts and had also stamped extras! The little dots above the letter 'i' in the laminated word friend came out from the die cutting process perfectly though.

One way round it might have been to run the MFT scissor cut words back through the laminating machine, between a folded piece of copy paper. Another one to try at some point!

I confess that I then moved on to laminate some pretty napkins - using matt folders. Watch this space!

I also love those 'tintables' card fronts and had forgotten I still had them, minus one used ages ago. They are already covered with 'resist' patterns or words, all ready for some blending work. Mind you, I deffo. need to work on my blending skills.

When doing the blending I tried out a new gadget - a Waffle Flower 'Mini Stencil Mat'. Basically it's a soft floppy silicone sheet with a lip around one side and the top - which you keep your work butted up against. It does away with tape and of course, much like the Misti and other stamping platforms, your work goes back into exactly the same spot if you take it away to have a look. Really easy to clean as well. I just bought the Mini Version (about A4 size) but there is also a larger one available. I got mine from HERE.

I'd also like to enter these cards into Darnell's NBUS Challenge #38 HERE. Several new things, both of the Distress Oxides were having a first outing and also the Waffle Flower stencil mat.