Before Christmas I bought a few of Lisa Horton's 'own brand' products and finally found time to have a little play with a couple of the items: 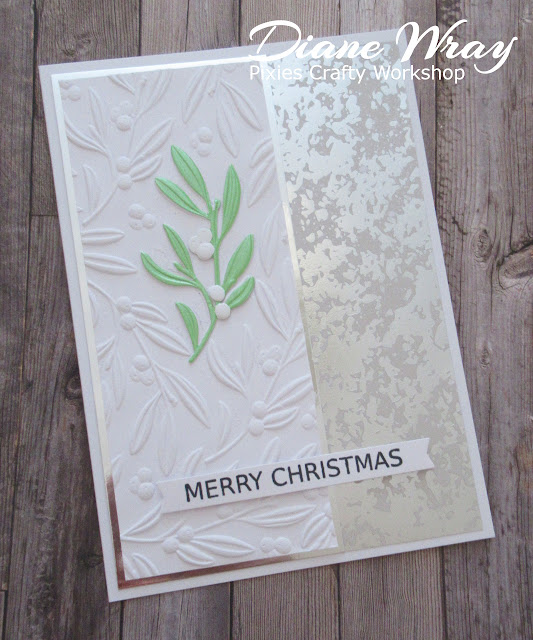 How very strange, the card looks as if it's behind gauze - yet the sentiment is clear as day and not out of focus. The green of the mistletoe is brighter and the embossing is much more crisp in real life - bet it's that shining silver that confused the camera!

- A5 white card blank, side opening (not made an A5 card for ages!)

- first hurdle was the 3D embossing. It took several attempts and the whole lot, including the Cuttlebug, almost went through the window at one point. I used white card for my final try which I sort of bent and fondled to break down the fibres a bit and then gave it a good spray of water on both sides using a mini mister - that gave the most successful result

- then embossed both sprigs by sitting them back into the embossing folder and running them through the Cuttlebug before fussy cutting the white berries and gluing them in place onto the green sprig. When I did that gluing step I sat the sprig on the convex sprig outline on the embossing folder so I could press the berries on without fear of distorting either the sprig or the berries - then kept the assembled sprig and berries for later use

- then added the slimline panel to a piece of silver and white trimmed paper from Chloe's 'Crackle' foiled paper pad - my advice, don't expect to find the actual  colours you see on the cover inside the paper pad. - avoid if you expect them

- glued that full panel to the front of the card and, using a glue pen, added the single green sprig of mistletoe

- thinking my trials were over, I moved onto another Lisa Horton product for the sentiment. It's a very clever idea but loads of issues. It's called 'Festive Banner Sentiments' and is a stamp and single huge 'multiple banners' die

- and being a glutton for punishment, I made two at the same time of course!

Lisa Horton's really great idea with the multiple sentiments stamp and the multiple banners die has even more worrying issues. The stamps appear to be cheaply made of acrylic (too stretchy to risk removing from the acetate backing sheet and no smell - a sure sign, the better quality photo polymer stamps used by larger companies have quite a pong). I left the stamp on the acetate and used removable tape runner on the back of the acetate to stamp, using the Misti. The widest part of the die for cutting the banners is a smidgen over the 6" width aperture on many smaller cutting machines, including mine and despite alignment marks, it still goes 'off kilter'. Almost impossible to not have one or two sentiments cut slightly adrift.

All in all - it's what is NOT said on these products that I have issues with - no definition of the materials the stamps are made from and also absolutely no mention of the overall dimensions of either the width or length of either the stamp or the die, as well as the mis-alignment. And the mis-represented paper pack cover, when I queried it, was blamed on 'photography limitations'. The normal gold and supposed 'rose gold' paper are almost impossible to tell apart - and the rose gold is depicted as a pale metallic rose pink on the pad cover. I actually thought I'd been sent a 'dud' pad of just normal gold and silver but was told pretty sharply, when I phoned to check, that wasn't the case. From the attitude I met with, I bet I'm by no means the first customer to query the discrepancy. 'Null point' for customer service! Buyer, be careful - I could well be wrong but I do smell the aroma of 'overseas production cost cutting' at work.

I suppose the lesson is to drop companies such as those like a hot potato once you find out their true 'modus operandi'.

This is only my personal opinion, but it was born out of bitter experience. To think that one card design would throw up so many problems.

I did want to enter this card into a few challenges such as NBUS - but am now so sickened by what I discovered during the crafting process, I really was hard pressed to even write this post - mostly as a reminder to self!

BTW, I do like the cards I ended up with - it was the journey to get to that point that gave me grief!