Wow, squeaking into Scrappy Mo's monthly Rudolph Days Challenge at the last minute here! It's one challenge I make a point of never missing - no matter what.

I've still been battling a painful and lately 'scrunchy shoulder' - sounds a bit like a bean bag (remember those from school?). So I decided to go through my box of saved 'shop bought' Christmas cards, kept to upcycle, and cull some of the older ones whilst also looking for the makings of a Rudolph Days card. I ended up being quite ruthless - styles have changed and many looked very dated since I began saving ones with possibilities (found one with a message in dated Xmas 2011!). Now I just have what I think could be 'useable pieces' with the backs cut away - ready for future transformation. Eventually I combined elements from two cards - and came up with this: 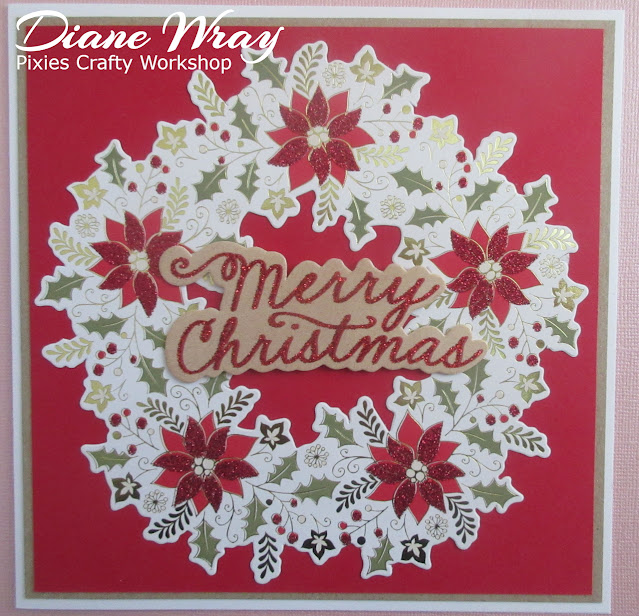 The light was weird here so the red sparkle on the sentiment and the poinsettias  - along with the lovely shimmering gold touches on the wreath - doesn't show up as well as in real life. But it's all there, I promise - and I love how two very different upcycled cards offered such a good match of toppers as well.

- sheet of kraft card trimmed to 6.5" square and glued onto the card front

- sheet of Christmas red card trimmed to 6.25" square and glued onto the kraft layer

- the already red-glittered sentiment was stuck on with a long sticky pad and, rather than risk crumpling it, I very carefully snipped the background of the card away from the added sentiment before trimming the left 'attached' piece of the background to the same size as the sticky pads - those babies were not going to part company!

- then just glued the sentiment piece, on the back of the 'card covered and not going anywhere' sticky pad, onto the middle of the wreath

To be honest, the planning and measuring for this card took way longer than the actual assembly stage. I had quite a few options in mind believe me! I used kraft card as the outer layer rather than gold (which I did hold up as an option) just because it seemed to detract from the wreath itself and also would have left the sentiment on kraft perhaps looking a bit out of place and not tied in. Am very much into 'tied in' these days! Sort of 'crafting bondage' really - I wonder if anyone will notice what I just wrote there? Also debated about adding some ornate corners to the red layer - but in the end decided it was more striking as it was. Len spotted it and said 'Wow, I would buy that one in a shop!'. Which is good enough for me.