Happy Easter everyone! I hope the weather is being kind to you wherever you are and that you have a joyous time.

We also have a couple of other things to celebrate - it's just over 11 years since I began this blog. And did you spot that this is Challenge #400? It was weekly for quite a while so the number of the challenge did rise rapidly back then.

By way of celebration, it's a slightly different prize this time. Still using snippets, as well as some die cutting and stamping - but a little bit of a different result instead of a card: 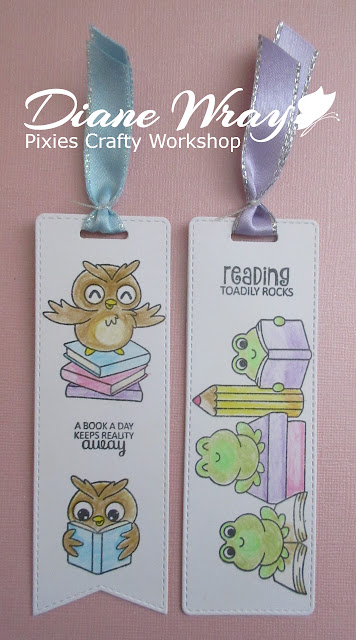 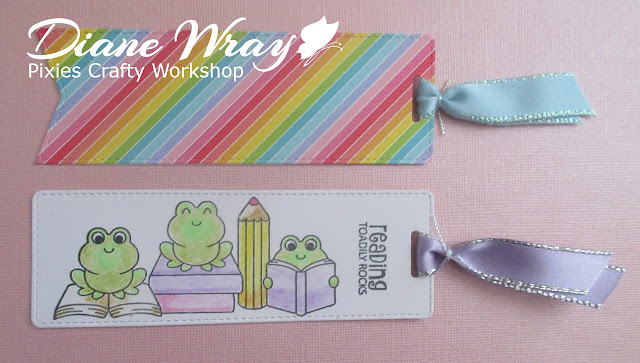 Second photo shows the reverse of a bookmark as well as the frog one with the image the right way up! And yes, the colouring IS much more vivid in real life!

- then I used the same dies to die cut snippets of paper from the Lawn Fawn 'Really Rainbow' petite paper pack as backings and to add more regidity, putting them to one side as I wanted to pick out the colours for the next steps

- on one white bookmark I stamped a froggy image and a sentiment from Clearly Besotted's set of stamps called 'All booked up' which has frogs, bookworms and also a row of books as options, plus fun sentiments

- for both bookmarks I used my smaller Misti, Memento 'Tuxedo Black' ink and a piece of acetate with a grid printed onto it for alignment - easy to make your own with printer friendly acetate as there are plenty of grids online to print . I was really lucky when a good blogging buddy sent me her printer friendly acetate - I returned the favour by sending her some 'grid printed' sheets to use with her Misti :)

- it's probably obvious how it works but I placed the bookmark I was using onto the Misti so that I had the size of the stamping area to follow and popped the acetate grid on top with a magnetic bar on to hold things in place. Then I laid out the stamps using the grid lines for spacing and also making sure things were straight, picked them up on the lid, removed the acetate and held the bookmark in place with the magnetic bar before stamping as one usually would

- next coloured both bookmarks using Faber-Castell Polychromos pencils, picking out some of the colours from the rainbow paper tags

- tied the ribbon in place with little pieces of iridescent twine, trimmed the ends of the ribbon and called them finished!

I would have preferred to use Pro markers in some ways - cutting the rainbow paper as a backing was originally to cover the inevitable bleed-through you get with Pro markers in fact. However, Len was busy in the garden when I was at the point of wanting to colour the images and lifting down the huge storage rack of PM's was just not feasible until this shoulder is better than right now. Having said that - I do so love colouring with pencils now, and they can at least be erased if you make a mistake!

Here's a few photos of the prize for this fortnight: 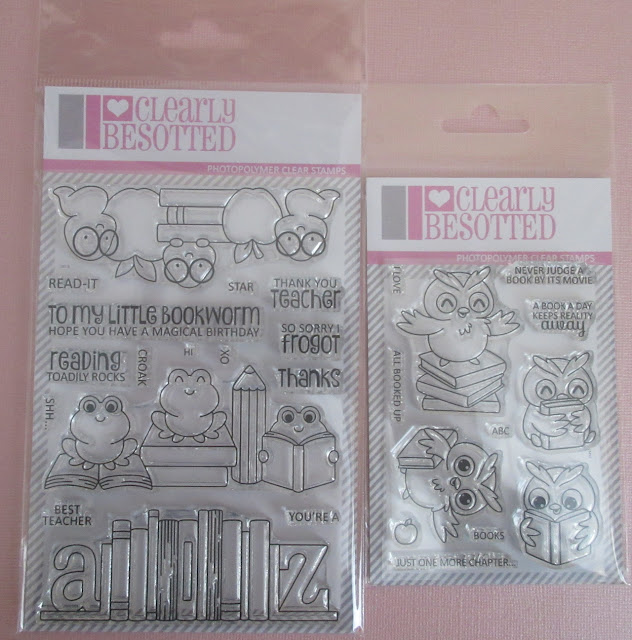 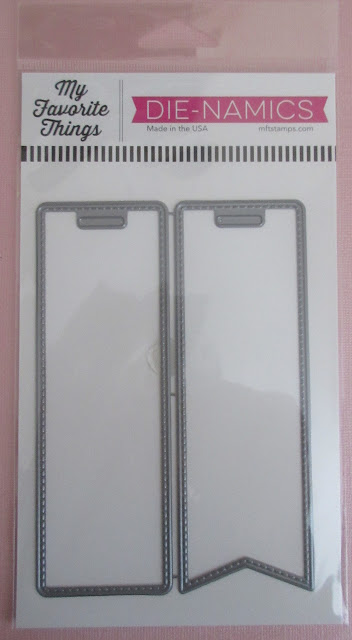 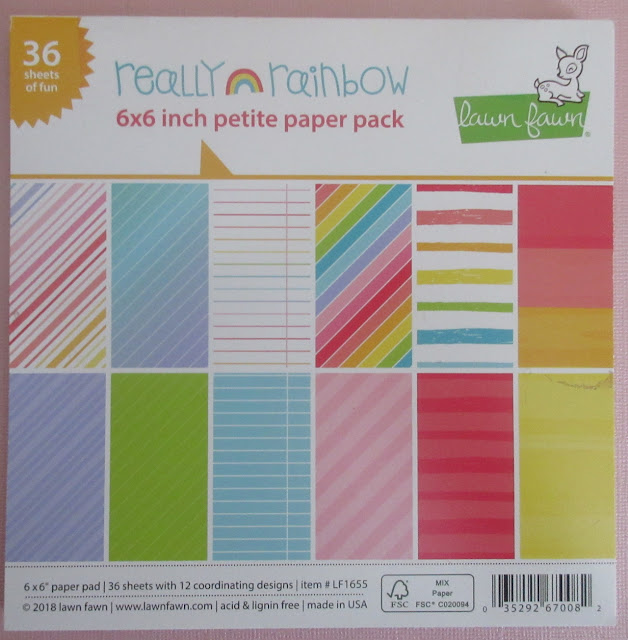 Ha! You need to stand on your head to take a proper look at the bookworms on the left hand stamp set!
The prize is a set of MFT 'Tall Tag Duo' dies, Clearly Besotted's set of stamps called 'All booked up' and also their 'Wise Owl' set of stamps - just perfect for making bookmarks, or cards if you wish. Plus, I have a Lawn Fawn 'Really Rainbow' 6" x 6" petite paper pack on order to complete the prize. Rainbow papers are so popular that it took me ages to track a pack down - but it's on order and will be here (with luck) before it's time for the prize draw - from Frau Green who is often a great supplier of 'out of stock elsewhere' items in the UK.

As always, the Snippets Challenge will run for two weeks and the Playground gates will close at 11am UK time on Saturday 17th April. The gates will open again at midnight UK time on the same day.

Remember, if you link into the Playground and don't say clearly that you want to be in the draw in a comment on here, then you will be bypassed if your name comes out of Mr Linky. I'm sure you all know I ask for a positive 'yes' on the blog post itself - just in case you're only playing for fun - otherwise I don't add you to my little list.
Please also remember that I only allow a total of nine other challenges, which makes 10 in total, when you enter a snippets make into the Playground.
I do hope you will all join in and make this a special celebration of the Snippets Playground Challenge #400.
Dudley is still coming up with new things to entertain us - his prowess at sitting up on his hind legs perfectly balanced during his 'grooming resistance manoeuvres' is amazing and the look of very serious concentration on his face is priceless! Just a shame I don't have any extra hands to hold the camera as I do worry in case he topples sideways from the table, although I'm usually too busy laughing anyhow!
One of Dudley's favourite places to lie during the day - apart from the table in Len's study where he can watch all the comings and goings from a window, or under my desk where he can sleep with his head on one of my feet - is right at the top of the stairs. It's a good spot for woofing at shadows and also spotting if anyone comes to the front door - as well as being a health and safety hazard to us humans stepping over him! His latest trick is to now leave monkey on guard duty at the top of the stairs if he's occupied elsewhere in the house or garden. It's not just left or dropped there but placed carefully - actually sitting upright facing, straight ahead down the stairs, just like a little monkey soldier!
Stay safe and be kind.
/) /)

I used this cute little bunny at the end of yesterday's post and at least one of you lovely Playmates remarked on it. I originally got it from our now departed Playmate Bernie who lived in Tacoma, USA. She left us in 2013 and I do so hope that she somehow knows just how loved and missed she still is, so many years later - now up in her huge, absolutely HUGE, craft room in the sky. She was one of our first Playground Pals and did her crafting in a 'closet' for so long and produced such lovely stuff - her first die cutting machine was, wait for it, a pasta rolling machine that she adapted! Those of us who knew her back then will no doubt recall that our lives were all the richer, as well as funnier, for knowing her. Who could forget her trials with the 'snow plow' guy who always came by just after she cleared the snow away from their driveway! RIP sweet friend, we won't forget you ........... and I'm sure you would be pleased to know that 'Bernie the Bunny Wabbit' strikes again :) x
Lots of love from us all to all of our Playmates - Parsnip, Dudley and of course me.