We've actually had sunshine here with no rain, for at least two days this past fortnight. Happy dancing here - especially from Dudley who hates going out in the rain and getting his paws wet!

Here's my snippets card for this fortnight: 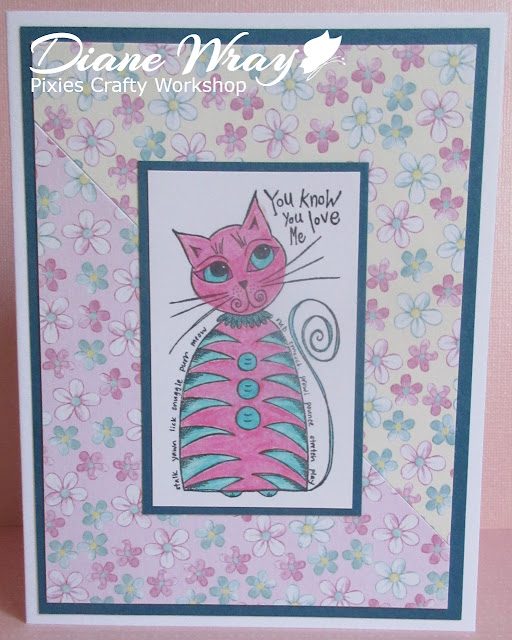 - snippet of SU's 'Dapper Denim' card stock, trimmed to an eighth of an inch all round smaller than the card front and glued it on top

- snippet of plain white card and a couple of floral snippets from a Me To You, Tatty Teddy (ancient!) 'Spring Chic' set of papers, probably one of the first paper pads I ever bought

- trimmed the white card to a little bit bigger than the card front so I could work with it more easily then stuck the couple of floral snippets on, with a diagonal line separating the two from one corner to another. They're the same design with the background colours different (one cream and one pink) so the difference is quite subtle

- trimmed the floral panel to an eighth of an inch all round smaller than the 'Dapper Denim' frame, and glued it on top

- the image was good fun to do. First I stamped the cat and sentiment onto a snippet of white card stock, using Memento 'Tuxedo Black' ink and a PaperArtsy 'Squiggly Mini 25' stamp

- then coloured the cat using pink and turquoise Faber-Castell Polychromos pencils and Sansodor blending solution, matching as best I could to the floral paper background

- trimmed the image down and popped it onto a slightly larger rectangle of 'Dapper Denim' before gluing it onto the card front - finished!

The stamp actually had a sweet little paw print just above the cat's head but I snipped that off as it looked a bit weird to me, even if it was meant to be a kitty thought bubble - and the little paw would be so cute stamped a few times onto the card's envelope or even elsewhere on the card front. The cat is a purrfect size for an ATC of course, and doesn't even need to be coloured - I just fancied using colours that aren't your usual kitty colours as the image is quite funky!

BTW, how I always know exactly what colour any plain SU snippets I'm using are 'cos I made up a swatch of all the SU card I have, many moons ago, and have added to it whenever I've bought new colours (albeit not bought any for ages now) 😀 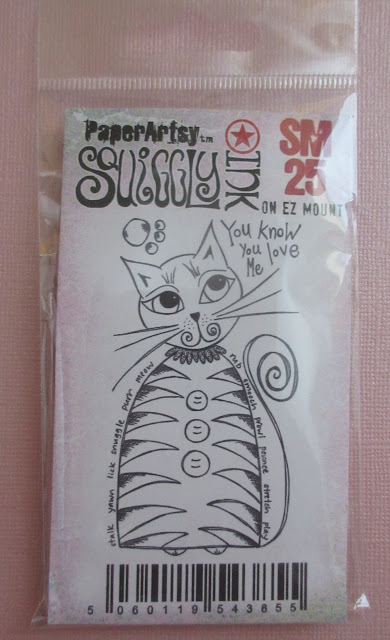 It's not one but FIVE chances to win a Paper Artsy ' Squiggly Mini 25' stamp. I've got five of these brand new (not chopped apart as I did with mine, I leave that decision to the winners) cuties on offer as they aren't expensive, we have lots of cat lovers in the Playground and I'm quite conscious that I don't often have kitty themed snippets prizes. Plus it's a little celebration that Dudley is so much better. Ha - I raided his piggy bank 😀

As always, the Snippets Challenge will run for two weeks and the Playground gates will close at 11am UK time on Saturday 21st March. The gates will open again at midnight UK time on the same day.

I had to go to the hospital eye clinic during the week (long story) and for now am all in the clear on all fronts with eye issues, even a cataract alert isn't causing concern. Whoopee! Mind you, whilst I was waiting for the pupil dilation drops to work in the hospital waiting room, a man gave one single cough and it was like a bunch of meerkats on high Coronavirus alert!

Earlier in the week some eedjit strolled into one of the practices in - despite what seems to be daily text reminders from them not to do that. The waiting room cleared and the reception area was closed down and then sanitised - as well as the fleeing patients being tracked down and contacted.

We had our usual Sainsbury's delivery on Thursday and apparently they are already geared up to delivering to homes with Coronavirus/Covid-19, or those in self-isolation and potentially undiagnosed. Basically, 'unload groceries on the doorstep, ring the bell and then run ..................fast'. It's not really funny I know but we do seem to be whipping up a real storm of fear, as well as panic buying, here in the UK.

Dudley is doing really well - his rash patches have cleared up and he's been so good when we needed (morning and evening) to swab the patches with saline solution, dab it dry and then apply and rub in the gel on several places - mostly on his tummy. He's such a happy little soul and just lies on his back on our bed to be administered to when we say the magic 'roly poly' words!

His latest thing is that the other evening Len was talking to me and purely said the name 'Arnie'. Arnie is his little doggie friend from over the way and Dudley began hopping about with anticipation, giving it a few woofs of excitement! Its obviously lodged somewhere in his memory that Arnie is his friend who has a go at 'hare boxing' when they meet and lots of waggy tails.

And to finish with: 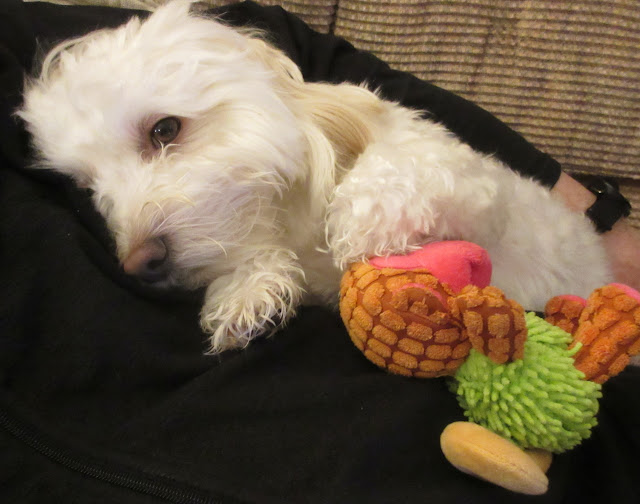 Len often relaxes on a sofa with his feet up in the evening to watch TV, and Dudley seems to know he's the most comfy spot to lie on and have a snooze! I took this really quickly the other evening, up until then he'd been totally asleep with his paw holding his favourite toy - but he did briefly open his sleepy eyes when I sneaked up with the camera. His dear little nose goes a bit brown in Winter, Bichons are the same I found years ago. And, there's a tale to his toy.

He is known as 'Stinky Monkey the Fourth' and he's fairly new, since this infection flared up and we ditched or washed everything we could. But 'Stinky Monkey', and this is the fourth one we've sneakily substituted since he arrived with us, is very special - he's Dudley's most, most loved toy in the whole wide world. He is his comfort blanket and he sucks his face until it's deformed and quite gross to be honest, and has even chewed an ear off a couple of his predecessors.

It always chokes me up a bit to think that, when he came to us in September 2018, his 'luggage' was a starter pack of puppy food, a few favourite treats, a little tennis ball, his cuddly fleece puppy blanket - and 'Stinky Monkey the First'. He had lots of other stuff here to welcome him, including goodies from his Auntie SaRn - but it was the little bag he brought when he left his doggie parents with all his worldly possessions in that was so sad. He's made up for it since though!

Hope you all manage to steer clear of Coronavirus/Covid-19 and that you find time to come and play this week. I'm a little behind on commenting at the moment but will catch up ASAP.