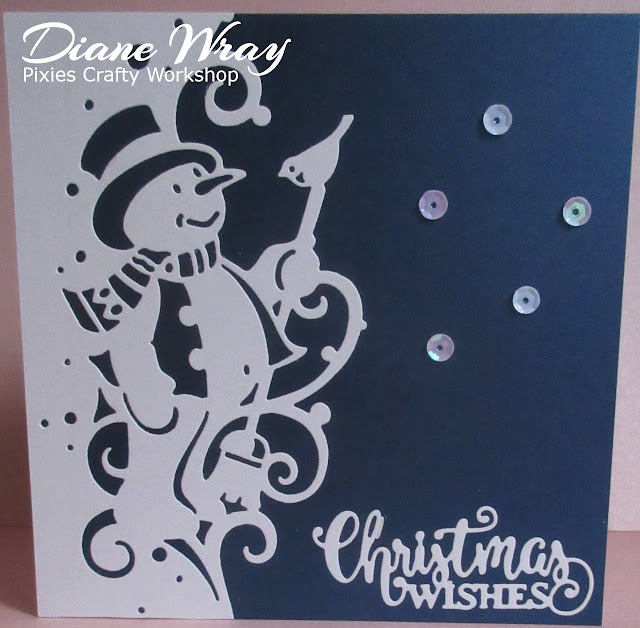 - snippet of deep blue pearlescent card, trimmed to exactly to the same size as the card front then glued in place

- I then added the snowman and the sentiment to the card front, trimming the top and bottom of the die cut snowman level with the card front- really easy when you use scissors and cut from the back using the card edge as a guide

This card has already been posted off but, before I sent it, I luckily spotted the little sliver of waste from the die cut and removed it. Can you spot it? It was dark at the time so no chance to re-do the photo. But anyhow - that's your little 'spot the boo-boo' for today!

I just love both dies I used for this card! The Snowman is a real delight and as ever Viv is my 'enabler' - plus the sentiment I added, using Dudley's pocket money, has so many uses. We have three more of the same sentiment popping up in a future draw this fortnight, wink, wink!

And of course today's prize is: 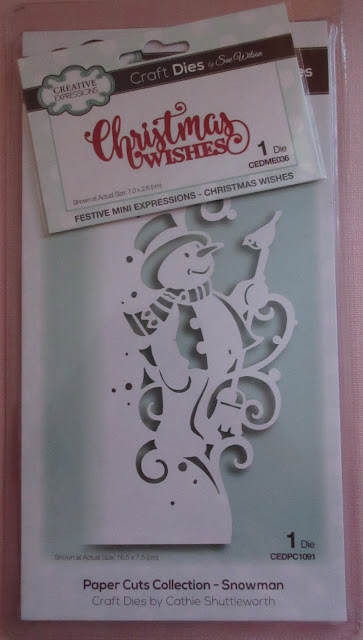 A Creative Expressions 'Snowman Edger' die - which was very kindly donated by our lovely Viv - plus a Creative Expressions Festive Mini Expressions 'Christmas Wishes' die from Dudley, sitting on the top of the snowman die in the photo - which, as you know, I had issues with due to poor light. When Viv sent me the snowman die just recently, of course I had to race online and buy one for myself. It's just perfect for making a really quick yet (IMHO) striking Christmas card. It's a very tall die at almost 6.75" so will only fit through a Cuttlebug length ways - which is perfectly fine of course.

I'd also like to add this card into our lovely Maureen's Rudolph Days Challenge - HERE. It's for everyone who didn't miss a challenge throughout 2019. I think you can enter, even if you were lucky enough to already have had a win over there during the year, it's a bit like Green Shield Stamps - a loyalty thing :)

I imagine most folk are going flat out today ready for Christmas, only two more sleeps! My shoulder is coping thank goodness - some things have had to be left for now but all the actual Christmas preparations have been done thank goodness. 'We shall eat like Kings ..... and a little dog will no doubt join in for a few dog-safe nibbles!'.