And so we change the clocks at 2am on Sunday morning, shortly after this is posted on the blog, but I just bet that Dudley won't let us have a longer sleep! Weekends are always a bit of an early start for us as Len goes to archery both Saturday and Sunday mornings - but before we had Dudley I could stay snugly tucked up in bed. Now it's a case of getting him outside pronto as soon as the signs are there!

It was Len's Birthday a couple of weeks ago and making a card for him was possibly not gonna happen as Dudley was still taking up a lot of time. Thankfully I did manage to make Len a card a couple of days beforehand, which luckily also doubles up as my snippets card.

So, here is my snippets card - on which I used a snippet of card I'd been playing around with ages ago using aqua shades of Altenew inks and some home made iridescent spray, a snippet of blue backing card and snippets of white card: 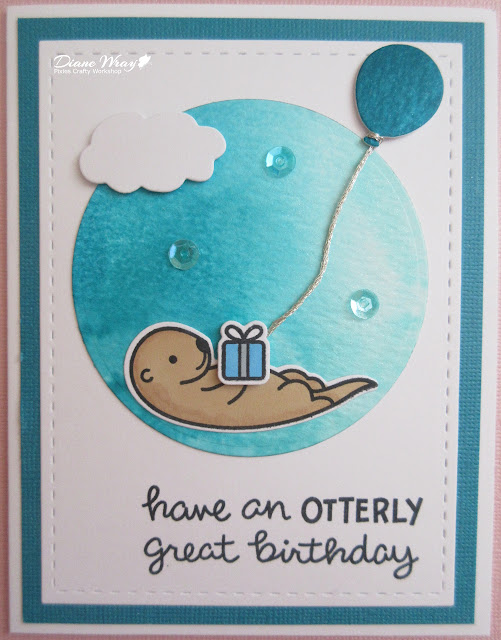 - a snippet of deep teal blue card from the snippets folder,  trimmed to make it slightly smaller than the card front, then glued in place

- a piece of white card which I found had already been die cut (yay!) using a die from the Lil' Inkers 'Stitched Rectangles' set of dies, onto which I stamped the sentiment from the Lawn Fawn 'Year Five - Otterly Birthday' set of stamps - using Memento 'Tuxedo Black' ink. Hooray for the Misti, although these stamps really do stamp perfectly every time

- a piece of Tim Holtz Watercolour card which had been swiped ages ago with all four ink pads from the Altenew 'Sweet Dreams set and then lightly sprayed with home made iridescent spray (more details of this are below!). I really had no idea what to do with it at the time so just popped it in with my blue snippets to wait its turn

- used the matching dies to die cut the otter and parcel (you could do this without the dies easily but I bought the pair as a 'deal'). As usual I die cut templates so I could place the aperture over the images, and then position the dies properly - always worth that little bit of extra time, even when really pushed!

- die cut a circle from the Altenew slightly sparkly snippet using a Spellbinders circle die - would have preferred to have a circular aperture on the card front but again, not enough time

- whilst I had the Cuttlebug in front of me I also die cut a white cloud using the smallest die from the MFT 'Cloud Trio' set of dies and a smallish balloon from the darkest spot on my Altenew snippet - using a die from the Poppy Stamps set of seven 'Celebration Balloons' dies (this is a fabulous set of dies, sadly not able to get hold of it to add into this week's prize as it's not around in the UK and overseas postage to here is silly money)

- then it was just a case of adding the elements to the card front - glued the circle in place, popped the otter on with glue as I wanted him flat, then added the cloud (to adhere it I used a snip from a thin sticky pad for dimension)

- I really would have liked to carefully cut the otter's paw before adding him to the card front so that he would be really 'holding' the parcel - but didn't want to risk ruining a card with so little time to spare, next time perhaps

- the balloon was a little tricky. I used a tiny piece of silver embroidery thread (six strands) and attached it to the back of the balloon (having realised I needed to knot either end to prevent it from splitting apart) - using a teeny piece of thin sticky pad and then popped the balloon onto the edge of the circle

- final touch, three little sequins to add something to the background using Glossy Accents as a glue - and we were done, hooray!

Little story - skip if you're only here for cards! I've had this stamp and matching die set for ages, always with a Birthday card for Len in mind. We used to go to Thailand each Autumn and there was a beautiful hotel we stayed at on the very south of the island of Phuket where they had a rescued sea otter called Kee. She was adorable - we visited her each day and she used to have a late afternoon stroll along the beach (complete with harness and lead) when most of the sunbathers had packed up for the day. Sadly, she wouldn't have survived had she been released back into the wild as she was just an orphaned pup when a local fisherman found her. Len and I were never ones for stretching out in the sun all day but we were taking the opportunity to have some quiet time on the shoreline as the sun was going down when Kee trotted along with her keeper late one afternoon. I was taking some video footage of the beautiful surroundings whilst Len splashed around in the warm shallows. And then, Kee's keeper (whom we'd befriended) asked if Len was scared of her - when he said 'no' the keeper unclipped her lead and she scampered straight into the sea for a few minutes play with Len! It was one of the most beautiful things I've ever seen and we were lucky enough that I filmed it. Of course Len was totally enchanted and it's a memory that will stay with us always - not just on film, you really had to be there to feel the magic. She was keen on catching Len's toes though and otters have such strong teeth you certainly don't want a pedicure from them! Sometimes I see little Dudley's face peeping over the side of his bed at me and he looks so much like a baby seal - or even a baby otter. So - that's why this stamp set really called to me for this year's card for Len!

And I mentioned the iridescent solution I sprayed the Altenew panel with. Way back in March, Gail of Ionabunny and I had quite an exchange of emails. She'd made her own iridescent spray and was happy to share some extra tips with me. Eventually I got it right by using a Ranger Mini Mister and the teeniest bit of Windsor and Newton 'Iridescent Medium'. It was trial and error - my first attempt totally clogged up the nozzle of one Mister - note to self, this stuff does NOT work undiluted!And my second attempt wasn't much better, but third time lucky. Thanks so much Gail - great way to make up your own clear Wink of Stella or similar and one bottle will go for miles and miles - to the moon and back probably! My advice would be to literally start off with just a cocktail stick dipped into the medium to add to the water in the Mister - Gail's tip, not mine but it certainly works! Last I heard, Gail was going to try it out in an empty Wink of Stella pen - which would be great as you would then have both spread with the spray from the Mister and precision with the WOS brush.

The prize this time is very much connected to this week's snippets card: 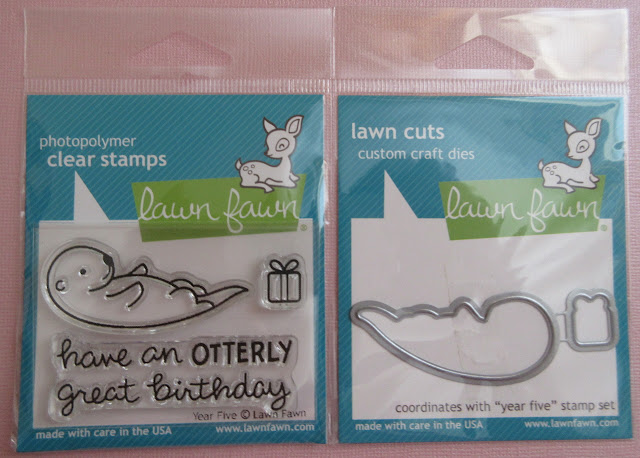 It's (of course!) a Lawn Fawn 'Year Five - Otterly Birthday' stamp set - with the matching dies. Obviously I won't split this prize so if you play and want to be in the draw remember that you will receive both items, makes sense to me as they are a pair.

As always, the Snippets Challenge will run for two weeks and the Playground gates will close at 11am UK time on Saturday 10th November. The gates will open again at midnight UK time on the same day.

No photo of Dudley today, he's been a real livewire this past week and it's almost impossible to get him to stay still for long - and there are only so many sleeping puppy photos you can take.

Love from Parsnip (always my special furry white bundle - he and Dudley are making friends, slowly! He's learned to say 'Nooooo' in a firm voice), little Dudley who truly is such a pickle and of course from me,