Phew, what a struggle it is to do any crafting at all with one manic Dudley puppy, however, I really HAD to make a card for Mia's Birthday to send to Germany so I used the opportunity to combine this week's snippets make at the same time - hooray!

Mia is now into elves and such, but the elves and fairies she likes are more quirky and fantasy styled rather than too pretty-pretty. So, my LOTV Art Pad ready coloured images weren't gonna fit the bill ........ sadly, as they are such a time saver. However, I found a stamp I bought absolutely ages ago and only ever used once (almost six years ago for her sister Livi's 3rd Birthday in fact!) - which would take some stronger colours to give it some 'oomph'.

So, here is my snippets card, made in 'fits and starts' with one eye on the little monster even though Len was at home (he had things to catch up on so we shared the puppy sitting): 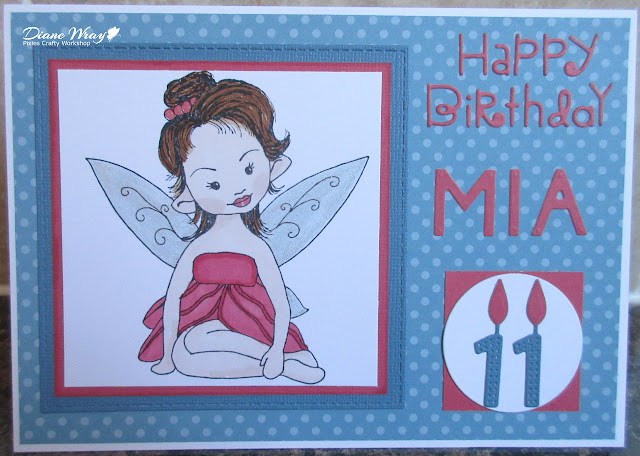 - a snippet of SU blue spotted card from the snippets folder, with just a small amount trimmed off to make it slightly smaller than the card front, then glued in place

- the sentiment was die cut using a die from the Paper Smooches 'Birthday Words' set of dies. I bought this little die set plus one for the toy box absolutely ages ago and this was its first outing. I remembered a tip that am sure Jules put on her blog a good while ago about using this die - and I think Jennifer McGuire used it as a technique recently as well. Basically, the letters all fall out of the 'Happy Birthday' die separately so you're faced with aligning them onto your piece of work. I die cut a small rectangle of vellum using the same die, taped that onto the top right hand corner of the card and then stuck each letter down in place inside the apertures - perfectly aligned and of course I could see through the vellum to position it

- next I did the age square using The Works '10 Piece Numbered Candles' set of dies to cut out the candle numbers in blue and also in pink, which I snipped and added on top of the flames

- added the age panel with MIA in between and then the image panel to the left - finished!

Then had to dash to the Post Office with it, along with the WISH die prizes from the other fortnight.

The prize this time is a couple of items the same as I used on my snippets card today - excuse poor photo: 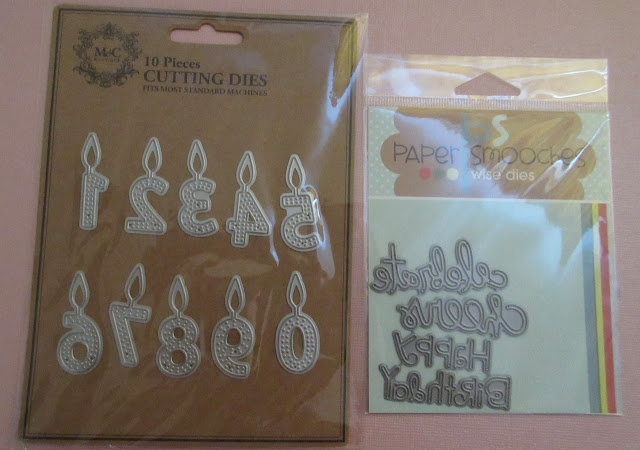 It's a Paper Smooches 'Birthday Words' die set (comprising 'celebrate', 'cheers' and 'Happy Birthday') plus The Works ' 10 Piece Numbered Candles' set of dies. Only one of the Paper Smooches sentiments isn't all joined up letters btw - and of course it was the one I wanted to use! Please note that I won't split this prize so if you play and want to be in the draw remember that you will receive both items, but of course you can then give one to a friend if you don't want both items! It keeps things easier for me - and also keeps the postage down as well.

As always, the Snippets Challenge will run for two weeks and the Playground gates will close at 11am UK time on Saturday 27th October. The gates will open again at midnight UK time on the same day.

Remember, if you link into the Playground and don't say clearly that you're wanting to be in the draw in a comment on here, then you will be bypassed if your name comes out of Mr Linky. I'm sure you all know I ask for a positive 'yes' comment on my blog post itself - just in case you're playing only for fun - otherwise I don't add you to my little list.

And to finish off - you can see Dudley in action last Sunday afternoon, over on YouTube. We've had to lay cardboard down to protect some new carpet (bad planning there but we had been searching for a fairly locally bred Havanese puppy for almost three years!) and I cleared away the covering of puppy pads to give him a free run :) Some of you will have seen the movie clip on my Facebook page, but if not then just click on the link below - and do turn your sound on, I still have a chuckle when I see it:

And immediately after that?

Love from Parsnip (always my special furry white bundle), little Dudley and of course from me,