It's time for a new Snippets fortnight - and the theme is just the same as usual - anything goes so long as you use one or more 'snippets/scraps'. Simples!

I'm totally caught up with commenting on the challenge which just closed - phew! I lagged behind a few times I know.

And the reason was our break in Germany. Even though we had wi-fi all the time there just didn't seem to be any spare moments to catch up - which is a good thing of course! The weather was glorious - and then we returned home to more of what we left behind when we flew off to Germany. Despite five fans running at full blast - they just seem to be pushing hot air around at the moment :)

My snippets card this time isn't quite as bright as the last fortnight's was - but it's still colourful: 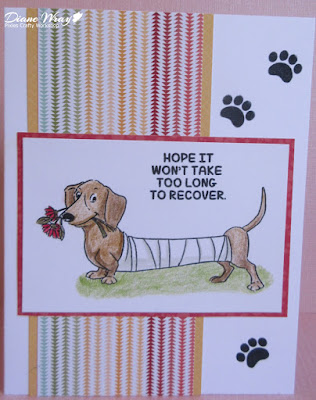 - first of all I found the striped snippets, and the pieces of backing paper - all from the Studio Calico 'Snippets' Collection paper pads I have here (and each one was a snippet as well. I keep little snippets in the back of each paper pad, popped into a sealed envelope which has been cut in half to form a pockets then stuck onto the inside of the backing card

- I deliberately left some overhang at top and bottom, which I trimmed off from the back (that gives you the line of the card itself to follow) just using sharp scissors

- then glued the image panel in place

- finishing touch, three little black paw prints using another stamp from the same stamp set - and the Misti of course!

To be honest, I was so behind after our holiday that I really wasn't sure I'd manage to make a snippets card at all - but I'm so glad I did! The stamp set is just such fun and really lovely to use - I can see it being super-useful for Get Well cards :)

Len just spotted the finished card on my desk and had a good chuckle. We spent some time on a few of the days in Germany with me showing the little grand daughters the rudiments of card making - and their Mama joined in too. I'd taken a load of stuff, including some stamps and also new colouring pencils and markers for them. So a lot of time was spent stamping and then colouring images - and Len's comment just now was 'The girls would be proud of you'! Little smile here :)

I'll write a bit more and show some of their work shortly. Kids amaze me with their ability to pick ideas up and then push themselves further and further - and it helps that their Mum is naturally artistic of course. We had a lot of fun and laughter for sure.

Without you needing to guess, here's this week's Snippets Playground prize:

Yup, it's an Art Impressions 'Doggy Kisses' set of stamps of your very own for the randomly selected winner - and I do think the sentiments are brilliant, along with the fun pooches.

As always, the Snippets Challenge will run for two weeks and the Playground gates will close at 11am UK time on Saturday 21st July. The gates will open again at midnight UK time on the same day.

Be sure to call back next week to see the fortnight's picks and the winner of the Sizzix 'Flowers #6' stamp and die set, Memory Box 'Sketchbook Imagine' die and a set of four hearts die.