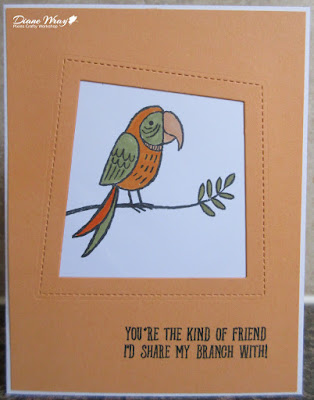 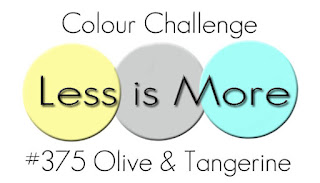 Fantastic colour combo and super image. Masking the bird's tail was a stroke of genius . . . It looks like one whole stamp instead of two! Great card.

Beautiful card! I'm not good in masking... you have made a fabulous work! Great recovering on the tail, it's perfect!
I'm sure that the hedgehogs will become more confident later and your kitchen will be full of them. Close the fridge! LOL ;)
Hugs

You have ROCKED both the LIM colour challenge (with your super image) and the wonky window from MFT!

Oh how I love that card Di - it's a stunner! Pity you missed seeing your wee tentative visitor :-)
Blessings
Maxine

Ha! It's when they come in and sit in a row watching the TV that worries me :) x

A cute card indeed. I love the story of the hedgehog. I'm sorry you missed her. [Bunny]

Such a sweet card, Di. It looks perfectly CAS to me. White space simply means uncluttered space without any stamping or PP. It does not necessarily have to be white. Please do let me know if and when the hedgehogs come maching in to claim the remote control lol.
Marianne x

What a fun card! Love it, tho, I don't particularly love orange. Saw the pet hedgehog at my daughter's last night...he was grumpy at being woken up.

Great card, Di, and interesting to read how you righted a near disaster. So entertaining to read your hedgehog tales - our hedgie keeps himself too well hidden but has been spotted by our neighbours occasionally. Hugs, Elizabeth x

I love this sweet little "less is more" card Di! Your little bird is so sweet and colored so pretty! Glad you were able to smooth that corner out. It doesn't look wonky in the photo. As Loll explained it to me one time, the color card stock is your "white" space-it is open with nothing on it. So it is less is more! lol I think it is a fab card my friend. Awwwww, I would love to see those sweet hedgies in person. Little "Miss Sweet Face" sounds so dang cute! To bad you missed her looking in the door. Too cute! Hopefully next time. Hugs, Brenda

What a super card Di and love the coloured card as the base for your sweet parrot and adore the wonky window to frame it. My husband would probably say the same thing about an unsymetrical frame too...lol. What fun that the hedgies are getting braver, and you may well find one will venture in for a closer look one evening if they can climb the step..lol. x

Love your card and its wonky aperture ! A fabulous sentiment for this cute bird ! Gorgeous colouring and no sign of disaster ! Thanks so much for sharing the card, the story of it and of the hedgehogs and for playing along at Less is More !

What a pretty card, Di! I love that sweet sediment! I think LIM allows colored card bases because colors can be "white space," which just means "uncluttered," which yours is! I learned that at the knee of Missus Chrissie and Mandy, poor ladies, lol! Wouldn't that be something if you had hedgies living inside just like Hammy and Parsnip ~ although, of course, you would have "real" messes to clean up, haha! Sorry to hear about the cold and hope you are all better soon! Hugs, Darnell

I say I bet this looks really cool IRL and like the wonky ness. Did you get Len tomstand on his head and see if it made any difference! Hugs Mrs ?A.

This is a color combo I would never think to try, unless I saw it used. It looks fab together, and is perfect for this colorful bird. I bet you smirked about the 'wonky opening' didn't you? (I can do wonky without a die! but not intentionally). It's a great card, and I love that sentiment too. Hope it cools off for you folks....and in my book, this is pretty CAS. Bet that hedgie was a little puzzled...what a cute story. TFS & Hugs

Well I missed this one - too often nowadays the names don't always come to the top of my reading list when someone posts, so annoying. Love this quirky bird and the wonky aperture seems just right somehow. I do hope your end comment doesn't mean that YOU have a summer cold but if so best wishes for a speedy recovery.

Such an adorable card, Di! Beautiful colouring. Love the wonky aperture and how you used these colours. I struggled with this colour combo. And no need to worry... it’s CAS-tastic! So wonderful to see you back here. Thank you for joining us at Less is More. xx

What a lovely sentiment, and it's perfectly CAS enough. White space doesn't have to be white :)
Thanks so much for sharing with us at Less is More, Anita x

Love this cute parrot and such a great CAS card too. CarolG