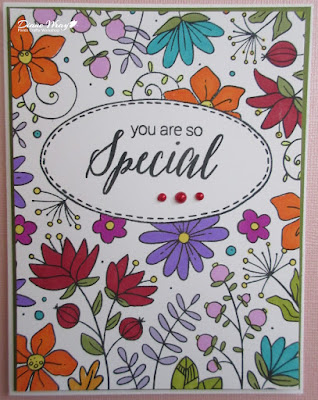 So beautiful. Loving all the colors and blossoms allover, perfect for our Allsorts theme this week. Thank you so much for playing along!

I know just where you are coming from when you refer to the desire to craft right now, I've been putting it down to the weather as lovely as it is, it's just too hot to craft. I found the only way to deal with current TV work is as the crack of dawn, trouble with that is I'm toally 'cream crackered' by 8pm.

Anyhow, enough of my gabble and onto your card wich really is so pretty and summery with all the pretty blooms and it's perfect for our 'Flowers all Over' at Allsorts challeng, many thanks for joining us.

Fabulous card, so sweet and summery.Love the stamp you use and your pretty colouring!
Hugs

A fabulous card and such a lovely flower stamp. I'm also struggling a bit with crafting but hopefully now we're back from holiday my mojo will return too!
Kath x

You made a fab card with this NBUS stamp. I think, you'll use it more often now!
Lia xx

What a gorgeous card, and beautifully coloured too.

Hi Di, a very pretty floral card, love the bright colours you have coloured them.
I've only been keeping up with my DT work although I've coloured several images and been having a good tidy up, just need some mojo to get actual cards made.
Have a wonderful weekend... Megan

This is so pretty and I love that stamp! I'm struggling to craft at the moment too. I blame it on the time of year or the weather or something! x

This is certainly 'flowers all over' and so prettily coloured. I'm sure your disenchantment with card making is just a 'blip' and that you will be making loads of cards before too long. I feel like that sometimes but then realise that I have so much 'stuff' that I have to keep going!! Looking forward to Sunday's playground visit.

A beautiful card Di. I'm sure your feeling towards crafting are only temporary Di, probably to do with your cold. hope you are feeling better than last week.

This is a beautiful summery card, such a lovely stamp. I hope your inclination returns but it sounds as though you already have an idea. Let's hope it flies. X

Feel pretty much the same too. A lot of other things going on which is blighting me being in the craft room. This stamped card is so pretty. Must say that even though I have graph'it pens and Copics my go to pens are always my promarkers. Hugs Mrs A.

A beautiful card, Pixie and a lovely stamp, beautifully coloured. The pearls are a perfect touch :-)

I think we all have times when we don't find crafting easy - I certainly do. There are days when I sit there and haven't a clue what to do and even when I try, I hate the result! There's a time and a season for everything! Hope you get your mojo back very soon :-) It HAS been rather hot for playing and making mess...

Love your card Di...and I empathise so well with how you feel. I put it down to the hot weather and the need to make the most of our summer...we may never get another!!...lol

I think we must all have the summertime blues! I haven’t got much crafting mojo either, and the hot weather isn’t helping. Your card though is lovely, and the stamp must make it easy to make a card. I’m thinking one layer here! Might need to do some retail therapy as well.xx

Very pretty. Maybe you need a new place to play?? The Lost Coast Designs challenge is No Body Here, no people allowed but don't forget to stamp, so your flowers are perfect if you fancy joining some fun across the pond. Hugz https://lostcoastportaltocreativity.blogspot.com/2018/07/challenge-57-no-body-here.html

This is really pretty Di and love the colour and the oval sentiment mat and the green background mat is all it needs. I am feeling a bit the same and my mojo has dipped a bit. I find it especially hard after having been away to get going again, and the heat makes it even more difficult. x

What a fabulous stamp, Di, your card is stunning! xx

One of my favourite images and great choice of colours and as you say a perfect sentiment.
Thank you for joining our 'Flowers all over' challenge at Allsorts.

What a beautiful card Di! I love that stamp too, so pretty and you have colored it so well. I am loving the sentiment too, so perfect. I hear you on the struggles, I am still struggling myself. Mine being more from Dwayne's passing and a not organized craft room yet! I know I should be farther along since Dwayne's passing but I'm just not. He used to come back to my room and sit down and chat a few minutes with me when he came in. So that makes it hard too. We all struggle at one point or another with our hobby. Anyway I hope your mojo returns soon my friend! Hugs, Brenda

This is gorgeous Di l love that stamp and l am sure l have it or one very much like it, love the colours and the sentiment is perfect with the added pearls hope you have a lovely weekend x

This card couldn't be more perfect for a Flowers All Over challenge Di!! It's so fresh and pretty..and I love that you stamped the entire background. I've often gone through periods where I just couldn't seem to get that creative spark, and my usual joy of crafting kind of waned. However, I often find that if I just stop worrying about it, and do other things for awhile, it comes back. Right now I'm concentrating on unmounting many of my old wood mounted stamps, and organizing my craft room. Also pulled out my sewing machine and a huge pile of mending that is at least 3 years old (eek!). Switching gears has actually helped me return to stamping with renewed energy. Summer is also a very busy time with family and some traveling, so that saps the energy as well. From the sound of it, you have been very busy, so it's no wonder your crafty mojo is on vacation. In the meantime, I hope that you don't stress too much about not having the motivation to craft...and just it flow as it may. Hugs!

Absolutely right Karen! Your words sum it up so well, thanks. X

Ooh this is soooooo gorgeous! Fab colouring on those cool flowers, I can see why you love that stamp. Aw I hope your motivation comes flooding back soon - don't push yourself, crafting has to be fun my friend! This heat doesn't help any either. Take care - hugs xxxxxxxxxxxx