As I said in Tuesday's post, I almost missed this month's Rudolph Days over at ScrappyMo's - goodness knows how but it totally slipped my tiny little mind.

However, a ton of frantic die cutting resulted in three Christmas cards, all the same - plus a fourth one that ended up being scrapped so that didn't count.

I had dreadful problems taking a photo of this card - tried almost every location in the house and eventually had to settle for an angled photo. Mirri card is an absolute P*I*G to capture on camera, and when I did manage a passable result, the lower lighting meant that the red satin mirri hardly showed up until I tried the 'angled view'. Even then, one side of the silver frame even looks buckled - and it most certainly isn't in real life. The card I ditched did end up with a buckled frame as I'd just used the (probably quite thin) silver mirri card on its own - but the other three really did work fine with the addition of a 300gsm identical frame glued on the back for strength and a slight change in approach: 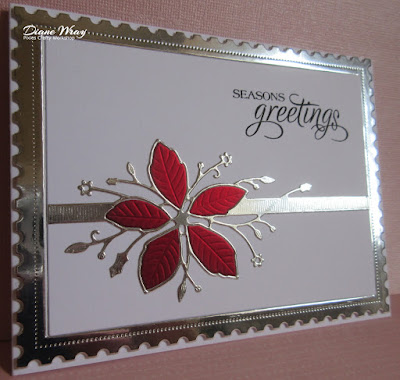 - piece of white card stock, cut bigger than needed, ready to assemble the poinsettia onto - always best to work that way if you can when using Stick-It adhesive sheet as it does part company with die cuts very easily and it's good to have a background ready to place it on

- silver mirri card, backed with Stick-It adhesive sheet and a lovely pre-loved die that a very sweet friend recently gave me - called Memory Box 'Poinsettia Ribbon'. For assurance I did use waxed paper between the die and the mirri card as my experiences with a Poppy Stamps 'Snowflake Ribbon' die a while ago almost drove me crackers - but this worked like an absolute dream, even with all the lovely little fronds

- then die cut five leaves/petals (never quite sure but I think the red parts are the leaves on poinsettias and the centre is normally the yellow flower). Used the same die with a Stick-It backed snippet of deep red satin mirri card and popped those into the gaps in the silver die cut

- then I could work out the position of the sentiment using the Misti, Brilliance 'Graphite Black' ink and a stamp from the Inkylicious 'Seasons Greetings x 4' set of stamps

- stamped the sentiment and that was the image panel almost done, just the frame to add and this was a big first mistake. I trimmed one of the card image panels to just marginally bigger than the silver frame and adhered them together using red line tape for a nice firm adhesion. What I hadn't thought of was the fact that the 'ribbon' part of the silver die cut was then underneath the silver frame at each side - and oh boy, did the distortion show!

- next step was to die cut three fresh frames using 300gsm white card and then stuck those to the backs of the silver frames for stability but was still left with the concern that there might be some distortion. Normally that wouldn't even show on most plain card stock - but, as i said, mirri is so unforgiving - sigh

- and then common sense poked it's head over my shoulder and whispered -'take a look at those left over squares of white card you have from die cutting the white frames' - bingo!

- then, it was just a matter of carefully taping the double layered silver frames to the card front(s) before popping the image panels in place

Looking back, I probably could have salvaged the discarded card by using the die to cut the image panel out - but common sense forgot to mention that fact before it was binned!

I hope some of this makes sense - often, recovering from the jaws of disaster is worth writing about - if only to remind myself in future!

And a HUGE thank you to the lovely friend who so kindly gave me the die - I absolutely adore it. Did think about layering some slightly smaller leaves/petals on top of the 'bloom' using a Memory Box die I found in the Christmas dies folder, but opted for 'less is more', and also normal postage of course!