...with a hint of flesh colour if you like.

I stuck totally to just black and white and am so pleased I finally managed to play along at Allsorts. Still suffering from a loss of mojo here so thought it might be best if I try to enter some of my favourite challenges, without sitting for hours pondering and dithering about. 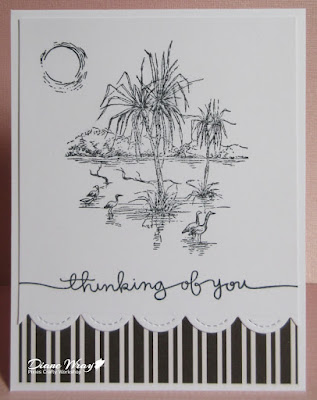 - next I trimmed a piece of white card for the image panel, an eighth of an inch smaller all round  than the card front

- trimmed a black and white striped piece of paper from the Back to Basics 'Monochrome' paper pack down to the original size of the image panel. A strip just for the bottom would have done but no way will I ever get through all the patterned paper here as I don't use it much these days - so I could afford to be liberal

- next used the Misti and Memento 'Tuxedo Black' ink to stamp the water scene followed by the sun in the sky. It was a little tricky as the stamps are from a NBUS set by 'Stamp-It' called 'Luscious Landscapes' and they're made of unmounted grey rubber. I used a combination of a piece of acetate with a grid of squares printed on to get the alignment right and a couple of test stampings onto scrap paper

- final stage was to glue the image panel to the patterned paper before then gluing them to the card front - that way you do get a chance to do any adjustments if you're a gnat's whisker out :)

This didn't start out to be a 'Thinking of you' card - but, once I was at the point of picking a sentiment, things were a bit limited. That'll 'larn me' to leave a comment on the lovely Kath's blog in which I said something along the lines of such cards not always needing either 'Sympathy' or similar sentiments. But, the gap was crying out for a sentiment and all my other 'long and squiggly ones' just didn't look as balanced. Plus, the scene seemed to lend itself to the sentiment anyhow - there, just talked myself into it.

And here's a prompt folks - I'm so mad I'd kick myself but then I'd fall over! From 25th to the end of each month it's always Rudolph Days over at ScrappyMo's - and this month's challenge is already rolling along. I wanna be there on Thursday and you still have plenty of time to play!