Loll and Bonnie have started off a brilliant challenge called 'CAS Christmas'. They have a great Design Team and there's loads of inspiration for CAS Christmas cards - this month's theme is 'Holly' - a perfect choice!

But for some reason, even though we've recently had our fair share of snow here, I just couldn't summon up the enthusiasm for making Christmas cards until just the other day. Indeed, the monthly 'production target' is in danger of slipping unless I get cracking. So, some batch baking was called for and six of these little cards is the result, and I can play along in the CAS Christmas Challenge: 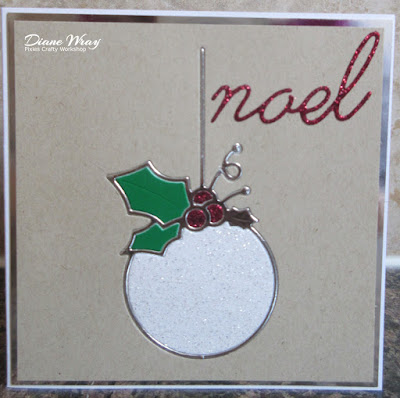 - then die cut the Memory Box 'Cabrini Ornament' directly out of the 'Desert Storm' panel ready to inlay the details - and backed the aperture with medium strength double sided adhesive sheet. Hint, when working like this is pays to keep the piece of waxed paper you'll have peeled off to add the adhesive sheet - it can be used to cover and protect the front of the aperture area in between building up the inlays

- then die cut the ornament outline from silver mirri card, the holly leaves from a snippet of glossy green card, the berries and ornament itself were cut from snippets of XCut red and white adhesive glitter sheet

- I didn't want to risk spoiling the fully assembled card by running it through the Cuttlebug so I just used the flat part of a bone folder to press firmly onto the die cut 'noel' - it worked a treat!

So that's the total pushed up to 37 Christmas cards - really should make a further 11 before the end of March to hit 12 per month but can't see that happening.