Answer - when the result just looks a flipping mess :) I hated the result, it didn't want to stand to attention either. This doubt was confirmed by a shudder from the 'in-house critic' who, bless him, suggested chopping off the stepper bit from the right hand side rather than waste the image. Which I did, then added some Josy Rose nail heads and a flower: 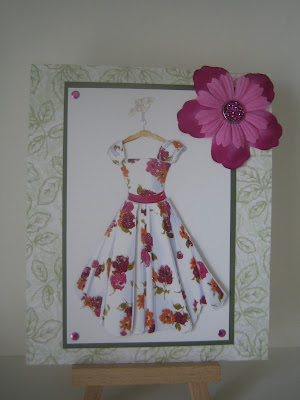 Still not sure about that mahoosive flower so it might be changed for a fourth Josy Rose nail head - perhaps not, I tried to remove said flower and was in danger of totally wrecking the 'retrieved wrecked' version!

- a lot of wasted paper, card candi, sentiment - all of which went in the waste bin

- backing paper from Wild Rose Studio's 'Butterfly Garden' paper pack (some of this luscious paper is in this coming month's Quick Cards Made Easy as a freebie, but only 6 of the 12 original designs are included, and this isn't one of them - still worth it though)

- layered flower and glittery brad from my goodies

- arnica and bandage, for the head I was banging here on the desk, both from Boots the Chemist


Have a great weekend everyone, whatever fun and frolics you have planned.

I'll be frantically doing the playground roll call this morning before trotting out this afternoon with a pal to a local village fayre, car boot sale there too (I love a good rummage!), plus dog show (happiest dog etc.), BBQ and other such fun things. And, the forecast is for decent weather :) Snort, my little pink (but of course) pac a mac will be coming along too though.

Edit - this is soooo funny, some of you saw (and commented on) a just begun post here which looked as if a demented octopus at the brandy bottle had been writing it. Truth is, my main laptop's screen died this afternoon and I've been trying to work using the base/keyboard and the craft room TV monitor. Totally impossible - I truly felt like the baby in 'Son of the Mask' with eyes hanging out on stalks revolving this way and that. In fact it was making me feel sick and dizzy so I'd just started a post, realised it was Mission Impossible, given up and run away to order a takeaway meal (most unlike us) and the garbage published itself when the whole caboodle decided to crash. Right now I'm working on the pink baby laptop/notebook instead and hoping it's gonna be OK to do the roll call on today. Only sayin' :) No need to send 'the men in little white coats' just yet!

I'll try to do the roll call on this much more friendly and healthy little cutie this morning before heading out this afternoon. But it's a much slower process, it's not as nippy as the main laptop and the screen is small so it's harder to have a good nose at your snippets makes. Sigh, why does it always happen to me. Of course, when my in-house IT support pronounced the screen totally defunct and said I should outline my criteria for a new one, he was less than impressed when I asked which full sized laptops come in the colour pink! Men just don't understand :(