This is en route to Jan, a cat lover, who hosted the 'WOYWW Golden Day' last week: 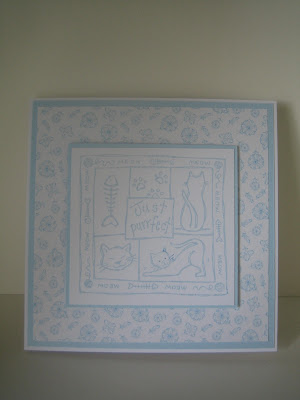 Hopefully I was sneaky enough for this stamp not to be seen when I bought it at Shopkeeper Gal's that same day :)

The stamped image didn't cry out to be coloured, so I tucked my paws in my pockets and left it well alone :)

I humped parcels and packages to the Post Office yesterday, one of them is a HUGE one stuffed full of crafting goodies for the Care Home where my step-mum now lives. But, you know what, she doesn't even go to the card making sessions :(