This week's challenge over at Penny Black's Saturday Challenge Week 203 is 'Monochrome Magic'. It would have easier to just use shades of black and grey but I opted to be awkward, as always, and went for greens. Waaaaay out of my comfort zone - I hope the little touches of blue are acceptable for the challenge, I've peeked at other entries and some have touches of other colours: 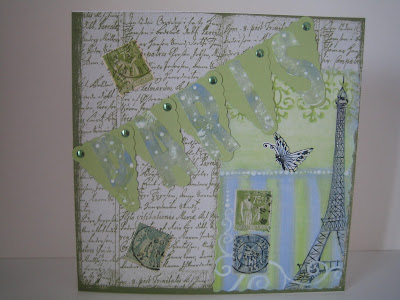 Sigh, the 'PARIS' lettering on the bunting shows up much better in real life :( The bright sunshine here is washing everything out - including me!