Firstly - my desk today so if you don't want to do other than peek/snoop/nose then you won't need to read too much :) 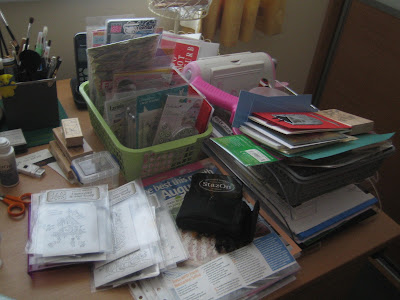 This is the pickle I left behind last week when we flew off for a break in the sun. Piles of used stuff to put away, that basket of unused things still lurking at the back - and the LOTV stamps I'd been frantically stamping ready to take for a bit of 'colouring in'. I can't move in here today and a real blitz is called for - just wish I was someone who could happily craft away in a riotous mess, regular blitzes waste good crafting time!

Then, to the left: 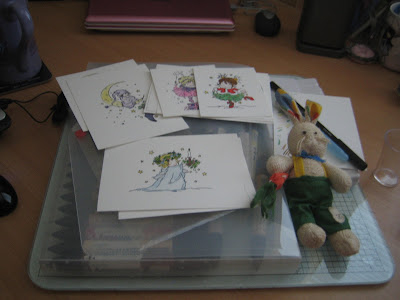 Pulled out of luggage and just dumped for now - a plastic folder with Aqua Markers in - waiting to be returned to their proper cases when I get turned round, some images I coloured on holiday,  a small plastic 'shot glass' that I use for water only (smile) - when water colouring on hols. Also, there's Norman the Rabbit who travels absolutely everywhere with me. Err, not on a daily basis you understand!

The images need to be finished with some sparkle etc. then used for Christmas cards and Norman needs some first aid. He has his own little carrot - sort of a 'Bunny packed lunch' - which is coming loose.

Norman is a long-serving travel companion who's very well travelled and much loved. I was given him as a little 'good luck' mascot by a wonderful gentleman in his 80's many years ago, also called Norman, when I moved away from the North East. The human Norman is sadly no longer alive but he was one of those people you wish there were more of in this world. He always looked quite shabby and some people used to shy away from him as if he 'didn't really belong', in their eyes - Norman was sharp enough to point this out to me so it must have hurt. But, if they had looked beyond his appearance they would have seen a fascinating chap, a real gentleman and an animal lover. He liked nothing more than a good natter and his eyes lit up if Benjie and Dougal (my little Bichons) alerted me to the fact that he was at our gate making a fuss of them whilst out walking his own dogs. I used to fly up the driveway, often with whatever I'd been baking, and though he wouldn't come in for a cuppa we spent many happy times 'putting the world to rights'. When I moved down South we often chatted on the phone and every Valentine's Day and Christmas he would send me a small bouquet of red roses - this continued to the day he died. The world is a lesser place without him for sure and I can just hear his voice calling me 'Flower' - his pet name for me :) So, Norman the Rabbit is very special and I'd be heartbroken if I ever lose him.

Oooer, this sounds a bit maudlin perhaps for a jolly WOYWW, but sometimes small things like that special friendship are worth sharing.

So, to see what else people are up to today - hop over to Julia's here. More sorting out to do here but I'll be sure to hop around as much as possible!