I was really moved by so many blogs on Friday devoted to Armistice Day and also Veterans Day yesterday. Today is the annual Remembrance Service and Parade in London: 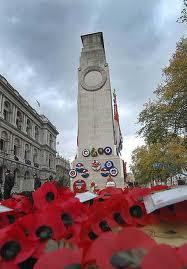 Each year I watch it on TV and each year I also weep for the futility of war, the bravery of so many who made the ultimate sacrifice and for those who survived but for many reasons never had the same life they knew before they went into war. One instance always really hits home and who can fail to be moved when the St. Dunstan's contingent march proudly past the Cenotaph and turn their sightless eyes sharp left?

A lot of years ago I was with Len, walking down Whitehall, a few days after the Remembrance Sunday Service and Parade. It was late evening and the traffic was unusually light so we crossed to the Cenotaph in the centre of Whitehall and stood looking at all the wreaths.

Then, almost hidden and tucked in amongst the wreaths Len spotted an empty quarter or half bottle of rum - the contents were certainly missing. Taped to the bottle was a single poppy and a small piece of paper on which was written 'Remembering you Harry. We had a drink in your memory'. Our guess is that, during the long wait for their turn to march in the parade, some ex-servicemen had had a little nip or two in memory of their old friend Harry. We'll never know the full story but we've never forgotten seeing that single poppy, attached to an empty little bottle with a message for Harry amongst all the other big wreaths.