I found this recipe in The Mail On Sunday's You magazine quite a while ago, and it's become a great favourite. What I like about it is that it's so quick and easy to make - a perfect meal in next to no time. It has coconut milk in but doesn't taste at all sweet - just more mellow.

The recipe itself is one of Sophie Dahl's, originally made by her father Julian Holloway - so not only can he act but he also apparently 'cooks like a dream'.

Finely chop the onion, chillies and garlic, add the grated ginger and sweat in the oil in a pan over a low heat for a few minutes.

My all time favourite gadget is a small electric 'blitzer'. So, I just roughly chop the peeled garlic, ginger and the deseeded chillies and then give it a blitz in this little baby......it saves a lot of time as I can't be doing with grating ginger (oops, I do sometimes leave a few chilli seeds in): 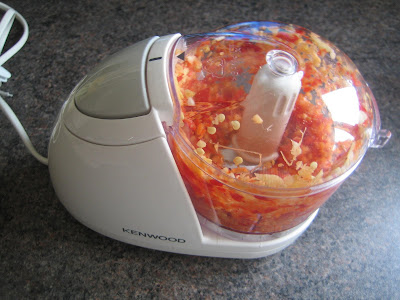 Add the curry powder (take your pick from any one you like) and stir for a few minutes.

Chop the chicken into bite-sized pieces and add to the mixture with a little seasoning. Cook for another few minutes. 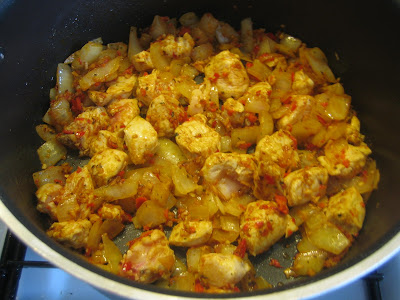 Pour the coconut milk over the chicken and simmer on a low heat until the chicken is properly cooked, about 20 minutes. Check the seasoning. Scatter the chopped coriander on top. 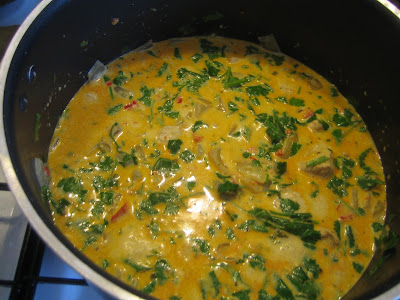 Serve with basmati rice (my never-fail 1-2-1 method for cooking rice is further down under TIPS). I also like naan bread and a big dollop of mango chutney with this curry :) 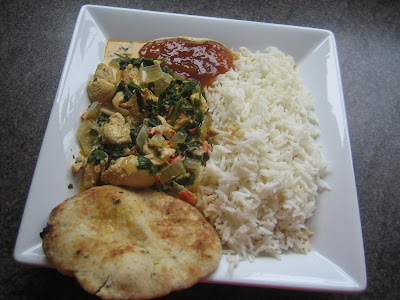 The price of coconut milk seems to have rocketed in our local supermarkets but, if you shop in Morrison's UK, then look where they have a small selection of imported cans and general Asian foods - usually tucked away at the end of the same aisle where the more expensive coconut milk can be found. It's about half the price and every bit as good!

It won't spoil the curry if you don't have, or don't like, coriander. I've forgotten it a couple of times and it's been just as good.

The recipe says it's for four people but I find that it's a bit tight on the sauce so, when I make this for two of us, I use the quantities above with two chicken breasts - and for four I double the sauce.

I buy Weight Watchers Naan bread - don't ask why when I like so many other naughty things to eat!

Can't remember where I discovered the infallible 1-2-1 way to cook rice - might have been Delia Smith. It's so easy and I've never under or overcooked rice since I found this method. Boil a kettle of water. Measure one cup full of rice (plain, basmati, Thai or wild rice with normal rice) in readiness, heat a little oil in a saucepan and put the rice in. Stir it to coat the grains and then add TWO cups of boiling water then salt to taste (if you use salt at all......that's where the final 1 in the 1-2-1 comes from, but I think we're all cutting down on salt these days). Be careful when you add the boiling water to the rice as it will bubble and steam right away. Give it literally one quick stir. Cover the top of the pan with foil and jam the lid on to form a seal. Turn to the very lowest heat on the cooking ring - I use the smallest ring at this stage. Set timer for 20 minutes and then when the 20 minutes is up turn the heat off and let the rice stand for 5 or 10 minutes before removing the lid. This effectively steams the rice I think and the beauty of this method is that you can increase the quantities by using bigger mugs etc. so long as you remember the ratio of 2 water to 1 rice! Simples :)

Enjoy - and at least it isn't a three hour marathon recipe this week :)