Amazing what you find

....when looking for a card in a hurry. Rootling through my stock of ready made cards, I came across one I made ages ago. Long before the current trend for 'shopoholic based' cards I found a sentiment stamp that seemed to sum it all up...apologies to one William Shakespeare: 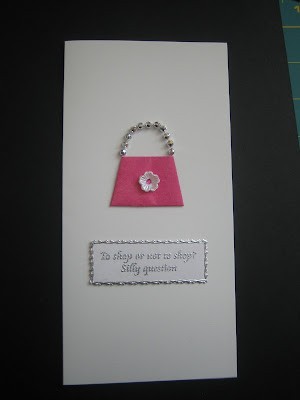 Ha! So this is why I bought the mulberry paper originally! I'd been wondering about that.

The card is just plain white, a handbag template cut from card and covered with mulberry paper, wrapped round the edges and very fiddly I seem to recall :( . That's why I'd put the wretched paper away and forgotten about it until Bernie and I were emailing one another about it and then I stumbled across the idea of using double sided sticky film. The handle is just a little length of silver beading, bought from Hobbycraft well before I discovered the joys of internet 'craft stash' shopping. The sentiment was stamped and then embossed in silver and I used peel offs to edge it with.

I've just replaced the original little embellishment I'd used with a pearlised flower and one pink gem - a girl has to have some bling after all!

In a rush today - off to the supermarket (on a Saturday along with everyone else I expect - oh deep joy). Then home to flick the duster a bit more, make a dessert and chop stuff ready to make Lazy Chicken Mediterranean Pilaff for dinner. We have a hungry young man staying tonight.

A question - I'm looking for some LOW tack double sided sticky tape or tape runners to do some masking. It has to be double sided - I've got the single sided low tack tape but that isn't going to work for what I want to do. 'Post-its' won't do the job really, I've tried! :( Any suggestions/recommendations as to which is best and where to find them please?

Hope your weekend is less manic than mine, Mr Blogger won't even check this for spelling. Now where did I put that shopping list? And if the radio plays 'The Flight of the Bumblebee' again while I'm working I'll scream!!