Hedgehog update and a hedgie card

Update first - we have two, if not three, hedgies visiting and having dinner almost every night.. After the sad fate of Harriet a couple of weeks ago this is such good news. From what the CCTV picks up we think it's a large adult and two smaller ones - the smaller ones sometimes feed together, jostling for space at the feeding bowl but the large hedgie tootles along for dinner alone (and in peace?). Occasionally they all stay cosied up and don't come out to play if it's raining during the night - perhaps I should run up some little plastic rain coats for them?

To celebrate I made this card yesterday - in between WOYWW blog hopping: 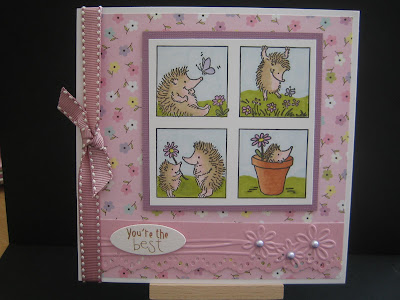 I'm not sure who the image is made by - I swopped some images with 'Karen from Kent' a while back and this was one of the ones she sent. On the subject of Karen, I emailed her a little while back and she hasn't replied - also her blog What's This Then?? hasn't been updated since 3rd May so I hope everything is OK, maybe some of you also know her? It's unusual for her to be so silent and the lack of activity on her blog is what's worrying.

Back to the image, I love the way it sort of tells a tale of a baby hedgie pondering, then having a Eureka moment, then giving his Mum a flower - and finally I like to think he's been popped into the plant pot along with the flower to keep him out of mischief! The image was coloured with Pro Markers of course.

The mauve card is from my snippets, backing paper is from a Pink Petticoat pack called Wild Blossoms Collection (free with Quick Cards Made Easy), the pink strip came from my snippets too. It's the plain reverse of a patterned piece of card which was just the right shade of pink, edged using a MS punch then embossed with a CB edge embossing folder. The ribbon is from my stash, along with the pearls and the Craftwork Cards sentiment.

I think this card might well be sent to the Wildlife Sanctuary where they tried to save Harriet - they deserve a little smile!

Almost forgot, I'm entering this into Jules' Crafty Snippet Challenge - Week 29 - but it's a very slow process getting those snippets to look any less in their folder :(

I'm off now to pack and post more of those Pro Marker nibs - and yippee, after a dull start the sun is shining!