Crumbs, that week went fast! And we've just  changed the clocks by an hour here in the UK overnight - you did, didn't you? That means darker evenings earlier of course, just in time for Halloween tomorrow.

Thank you so much for all the kind comments and get better wishes re. 'shingles'. Thankfully the rash is already clearing nicely, most probably as I went onto medication the very same day - which was a fluke as I only mentioned it during a routine appointment. The back is on the whole less painful too - getting in and out of my car is a nightmare though. Little by little is how I'm handling it - trying to keep moving seems to be key, loads of fluids and thinking happy thoughts :)

Anyhow - here's my snippets make for this week: 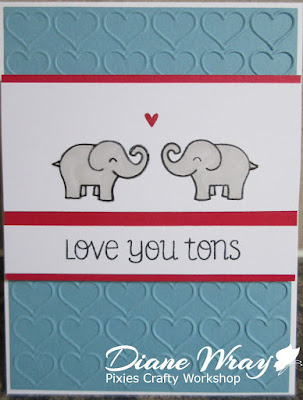 - a snippet of SU 'Marina Mist' card stock, embossed using a SU folder called 'Happy Heart'. Trimmed to just slightly smaller than the card front and then glued in place

- the little elephants were great fun to play with as I used the 'mirror technique' for them. The stamp set I used is called 'Love You Tons' by Lawn Fawn and it does actually come with two slightly different little elephant stamps which face one another but I wanted to do a mirror image of  just one - to prove it can be done really!

- so, I stamped both elephants onto a snippet of white card facing one another, following Jennifer's video. I used Memento 'Tuxedo Black' ink and a stamp from the Paper Smooches 'Mirror Blocks' set, plus a little elephant from the 'Love You Tons' set. Found I had to work very fast. Jennifer recommends using VersaFine ink as it doesn't dry too quickly and I can see where she's coming from on that one!

- then I stamped the sentiment from the same set directly underneath the elephants and would you believe there was a teeny bit of fluff caught up on the ink pad so I ended up with a bit of a smudge - sigh :(

- not to worry, I just stamped the sentiment again onto a different piece of card and slightly rethought the card design :)

- trimmed a snippet of SU 'Real Red' card stock plus the image and the sentiment then popped them onto the red card using a tape runner rather than glue (not sure why and it was daring in itself!)

My card design bears more than a passing resemblance to one of Jennifer's cards on the blog post linked above - I really liked the idea of the red, white and turquoise blue together, with embossed hearts on the backing panel.

Of course you can achieve good results using just a piece of acetate and no Misti - I've done this in the past, especially for 'reflections' in water or on snow when you want to 'flip' the image. But IMHO the Mirror Block stamps and the Misti do take a lot of the 'risk' away. You get the chance to stamp over the image again totally accurately if you aren't happy with the first 'press' and the Mirror Blocks are much less likely to 'smudge' as they're made of polymer just like clear stamps rather than slippery acetate.

But there again, we always managed to cope doing it the old way didn't we? I often stop and wonder when the craft world will run out of ideas to tempt us into spending more money - not likely for a good while yet!

Lets move straight onto the weekly peek at the picks, I've kept the numbers down this week - purely as am limiting my time spent at the desk: 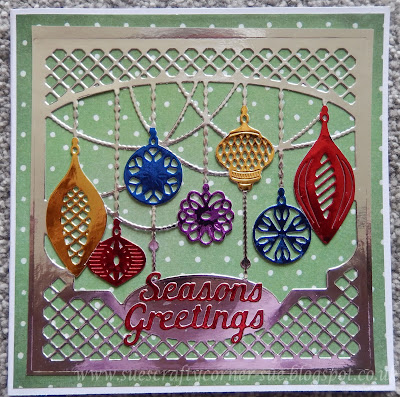 I really love this card, made by Sue T. A fabulous way to use up little snippets of mirri card and I, for one, can't bear to throw away even the smallest snippet of any sparkly or shiny card :) 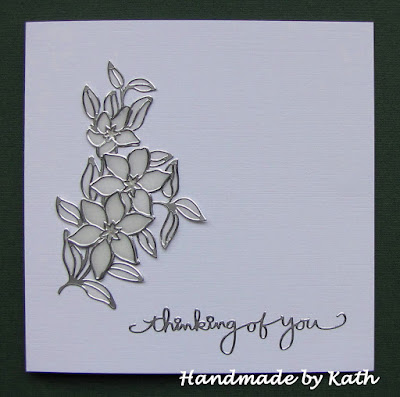 Kath shared this really elegant card with us. I love the way she used vellum with a gorgeous peel off - perfect use of a vellum snippet and also for Less Is More's challenge for last week which was to 'use vellum or acetate'. 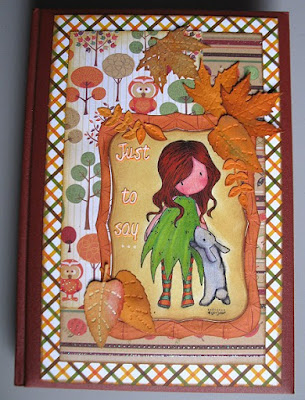 Just had to include this wonderful note pad, made by Alice. It sums up Autumn perfectly and really is something I'd love to try making at some point in the future. My understanding is that Alice used the outer cover of a hard back diary or similar as the starting point - so it's clever upcycling too! 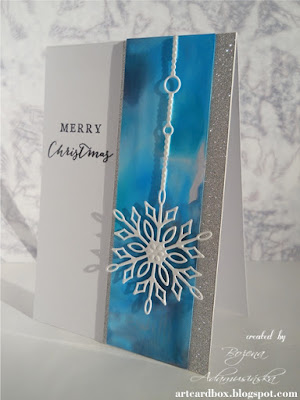 Lovely to see Bozena playing along with us again - and what an inspirational Christmas card too! Some wonderful 'colour smooshing' on the blue panel there as well. 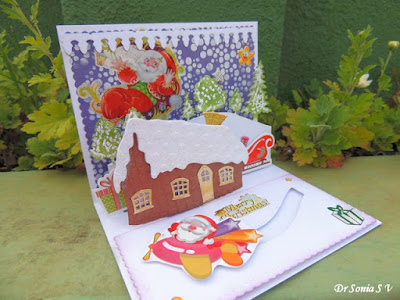 Sonia flew in with this marvellous pop up slider Christmas card to show to us. As always, it's an absolute delight and there are loads of details over on Sonia's blog if you want to have a go yourself :) 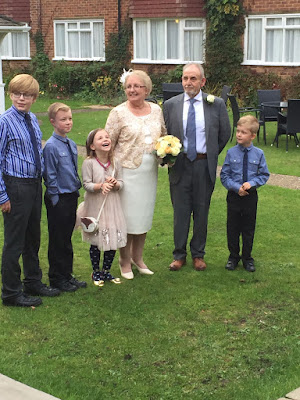 And, Sue and Roy tied the knot on 22nd October! After his illness and such a worrying time it was really heartwarming to see so much happiness on their special day. The official photos should be on Sue's blog before too long (I hope so Sue?) - meanwhile here's one to keep you going :) Such a pretty outfit as well!

We had two new Playmates last week - and 57 of you came to play in total. As always, such wonderful inspiration from all of you! 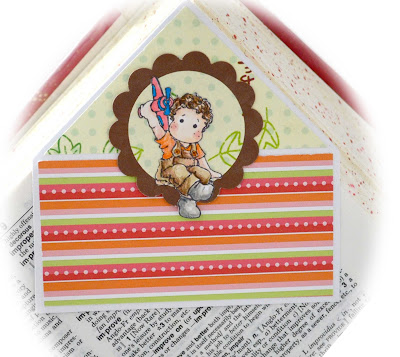 This is the sweetest bookmark, made by 'Paperpapier' - I think it's so pretty and very clever how it slips over the corner of the page. 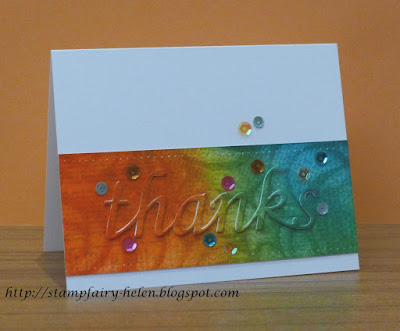 Helen hopped into the Playground to share this beautiful card - I love the 'camouflage' technique and this really is such a perfect example!

Welcome to both of you and we hope you come back and play really soon!

And it's prize draw time, for the prize from last week. Our winner of the Tonic Studios 'Scotty Dog' die and the Inkylicious sentiments stamp set called 'Seasons Greetings' is:

Jenny L
Well, that gave me goosebumps when Jenny's number popped straight out of the Random Number thingy! First of all, Jenny's card last week featured Scottie dogs and tartan as my own snippets card did - by pure coincidence. And, Jenny's nickname at school was 'Scottie' so she has a real affinity with Scottie dogs!! Well done Jenny, I'm sure everyone else will agree that this prize is just perfect for you.

Sadly, no-one took up Penny's kind offer of tickets to the Crafting Live Show at Peterborough on 11th/12th November. But it was really kind of you to offer the tickets Pen! 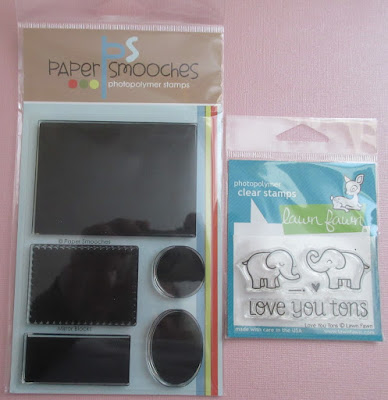 One set of Paper Smooches 'Mirror Blocks' stamps (the largest stamp is 2.5" x 3.5" by the way) and also a Lawn Fawn 'Love You Tons' dinky little set of stamps. Just like I used for my snippets card today.

The Snippets Challenge will run for one week and the Playground gates will close at 11am UK time on Saturday 5th November. The gates will open again at midnight UK time on the same day.

A maximum of ONE entry and please say in a comment if you wish to play and be a possible winner of the prize. Once again, I think both items work really well as a pair but if you have a burning desire for just the 'mirror blocks' stamps or the 'Love You Tons' stamps then please feel free to say and if your name pops out then I'll do a second draw for the item you don't want. Please also link back to the Playground in your blog post to be eligible for the draw.

Parsnip (aka the little white peril) is in disgrace after doing a practice run with green eyeshadow ready for Halloween. But he sends a wave from the 'naughty corner' anyhow!