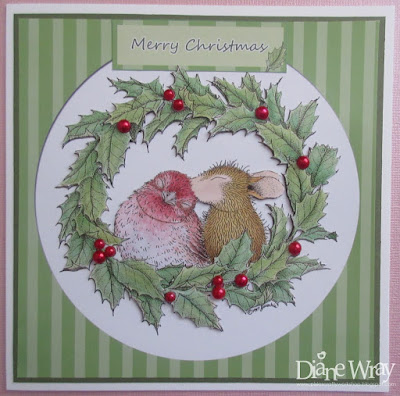 A really sweet card Di. What a pretty image. Barbxx

Hi Di, so so so cute, love the little house mouse images, your card is amazing, have a very happy Easter weekend...Megan

A lovely cute card and a great find in your Really Useful Box!
Kath x

A really great creation as always Di, need to get my skates on if I am going to join in this time round.

Aaaah an absolutely gorgeous creation and so adorable too, Luv Sam x

FABBYLICIOUS make Di! Thanks for entering it for this month's Rudolph Day challenge

This is so cute and elegant toghether!! Fabulous choose of colours and your decoupage is just perfect!
I wish you a very Happy Easter!

This is gorgeous Di, what is there not to love about House Mouse.

Youn do manage to find some really cute images for your cards Di. I love this one, and the way it tones so well with the backing papers.
I need to do some 'batch-baking' too. Falling behind by the third month doesn't bode well for the rest of the year! Kate x

LOVE House Mouse, so this card looks great to me. Love all the dimension from the decoupage elements too. It's a GREAT Rudolph Day card mate.

This is such a sweet image Di, and don't you just love it when you find something that you made a while ago and it's just perfect for a new challenge! The image and background paper work together beautifully x

I love that house mouse image. Such a cute Christmas card. Cara x

I adore that cute House Mouse image Di and the green striped paper is the perfect match. A really pretty card. x

Sweet image and well done that Really Useful Box. I think I should start one. Still doing well with your target, I think, to have made that many already. I'm sure you'll catch up. xx

Lovely card Di...how can you be behind at 40 cards for Christmas...you must have too many friends!!

Love it. I am currently preparing for a house move, so I'm cleaning out tons of stuff in my office/craft space. Sadly, so far I have not come across any nice finds like this. I'm doubting there is a Really Useful Box in my entire house.

Love this - the image is just adorable. Good find in your Really Useful Box - don't you just love it when you discover some long forgotten crafty things and your card comes together so quickly? xx

I'm so proud of you having that many Ccs done, Di! I have six, she says groaning so loudly, the next door neighbor's dog just started barking!! (I totally forgot about Rudy Days this month with Easter prep.) I think your card is like a big hug! That image is so awww-dorable!! Happy Easter, my friend! Hugs, Darnell

What a sweet and fun card you've created here, and I love looking into those useful boxes of what I call "doo-dads" and try to make cards with what I find. I love the berries on the wreath and those angel kisses are to die for :)

You've got plenty of time to fit 8 more cards in by next Thursday! ;) I love this one, so glad you rooted thru that box! Thanks for adding it to the link at CHNC Extra!

This is cute and I love the colour combo. I think I need to do a bit of batch baking too. I only have half as many made. Weather forecast is set for a dismal next few days so crafting here I come. Hugs Mrs A.

Hi Di! This is such a sweet card. i just love the image...all those decoupage layers look wonderful and the image is so sweet!

I am amazed at your finished Christmas Card makes to date. I think you are doing really well! Much better than me...I need to sit and do some batch baking...lol

Thanks for taking part in the March Rudolph Days Challenge!

Such acute image and a great frame.

Love this one Di. That HM is just so adorable xx

Beautiful card, I so love this cute image and those wonderful holly leaves.

Such a beautiful card!! Love the holly wreath. Very cute image. Thank you for sharing with us at the Rudolph days challenge.
-Berina
Moxie Craftie
Rudolph Days Challenge GDT

Your card is so adorable! Everything looks so clean and perfect!

This is beautiful. That striped paper is perfect with your image.

superb card, Di, I love your wreath and image, both are perfect! And you made 40 Christmas cards, wow, you are incredible ...