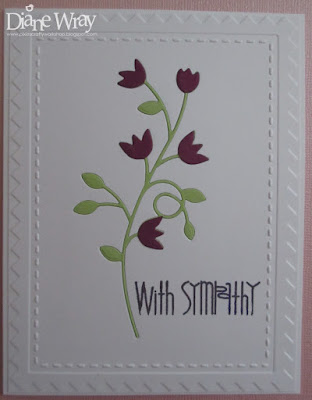 THis is such a pretty card Di, and it inspired me to pull that same pinked embossing folder out and play with it. I'm still waiting for an idea to pop into my head :)

Lovely! - I can't join in as we are away for a month

I love this very pleasing & delicate CAS layout Di. Just right for a sympathy card. Nice fresh feel to it too.

Just linked over Di and am praying for Darnell to pecker up health wise too... and wow love your card .. great colour piecing there, well done !!!
Thanks for sharing! Jumping over to the playground now..
Shaz in Oz.x

I love everything about this card Di, it's beautiful.
Janice x

Beautiful and Classy card....hmmm...I am wondering if I might have this die...I sure do love it! Yep, I always visit Darnell's blog..sometimes I call my Mom and read her posts to my Mom over the phone, she is just so darn funny and can cheer up in a heartbeat!!

It is a really pretty die and makes a lovely card. It will cheer someone up. x

Love the cas style and fabulous die - perfect for a sympathy card. Still fighting through my pile of NBUS deciding what to do! xx

This Geneva Vine is very pretty Di and that Cuttlebug folder is a fabulous frame for it. x

Lovely and delicate card with these flowers and the embossing! fabulous!

A beautiful card - love the die you've used. I'm still trying to decide which NBUS items to use for my entry!
Kath x

This is a gorgeous card Di and that embossed frame finishes it off beautifully :) x

Beautiful card Di, love the inlaid die-cut. And great idea to add the flower heads after the stems. :) I could see myself doing it in reverse and having gaps. Great tip! xx

Just love this, Di. A beautiful CAS card. My die wishlist has just got a little longer! xx

So beautiful Di is your card so elegant too!.....l have candy on my blog x

Di, this is totally and utterly stunning, love it

A lovely card Di. How sweet that die is and I love the embossing folder. Both die and EF could be used for so much. Barbxx

This is lovely Di, such a pretty die and super embossed border.
Jean x

Beautiful card Di! Fabulously CAS and I love the colors you chose.

Lovely card, let's hope it's a while before you need to use it too

I definitely would have ended up with a gap, too, Di, so I'm with you on just how you did this fabulous design! Thank you so much for making me your headline and for all your friendship and support! And, of course, thank you for playing in my NBUS Challenge #6 with your pretty sympathy card! Enjoy your day and I hope your back is mending!! Hugs, Darnell

Just a lovely card! Love the elegance and simplicity.

This is gorgeous, such a fab design. I'm loving that embossing folder more and more the more you use it.

Wonderful die & love how you framed it, Di--perfect sympathy card!