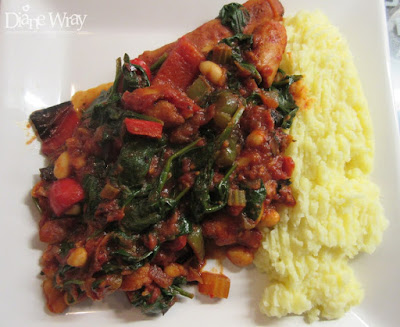 I love sausage casserole, but six sausages between four people? No way! I reckon we eat 5 between 2 of us, 3 for him, 2 for me. It's odd how inconsistent recipes can be, some of them produce vast portions and some seem designed for people who snack all day and eat very little at mealtimes.
Jane

We certainly need comfort food when it is cold and damp weather - no sausages for me however I'd have to stick to the veggies.

As you know, I love a good recipe Di ;-) - this one sounds delicious, I love paprika but haven't used it in a sausage casserole before, I might just have to give it a go!

Mmmmm it's only 9.30 and you have made me feel really hungry! xx

Yum, thanks for sharing the recipe. Hubby was getting a bit bored of my 4 dish repotaoire! Cara x

Looks and sounds delicious, Di. I'll have to try it :)

This looks and sounds great Di and will definitely give this a go. I think for two of us I might use just one tin of tomatoes and cut down a bit on the peppers and perhaps add just a little less of the spices to even things out, but although I have had smoked paprika with chicken, I have never tried it but not with sausages so something just a bit different. x

This sounds so yummy. I haven't been doing much cooking real meals lately and maybe this will motivate me. I'm on a break today and resting up. I love mashed potatoes and haven't had them in forever. Your card for NBUS is lovely. The pinking stitch is unique and the die is so pretty. I like the inlay of the card and the rich razzleberry color. I hope to get enough supplies back into the house to participate in time. Today I am just taking a break and resting and visiting blogs. It's been so long and I'm having withdrawal pangs!

Okay, now I'm hungry. I'm pro comfort food! I was at home being sick the other day and hubby has packed and moved all the snacks! What the heck. I had to go to the grocery store.

Sounds a delicious dish, especially on the cold day like today. xx

Oh, this looks wonderful and would be the perfect dish on a cold night. I agree with you that the portions in most recipes are way too small for an average adult and I nearly always increase the amounts when I cook. Thanks for posting Di!