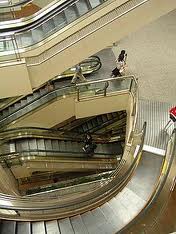 And I thought I was alone in my distaste for these. Hubbie always has to hold my arm on the moving walkway as I have tripped so many times I have lost count. Not had an incident with an escalator since I was a child but I always create a queue behind me as I hesitate to step on, lots of people tutting doesn't make it any easier to get the balance just right lol. Your Tuesday tales always make me smile though and that is certainly in short supply here now. Hugs, Amanda x

Hmm here's another one who hates them, my brain does not speak to my legs as l approach the first step and l have to wait for the signal to get there. I'm the same on spiral staircases too!

Your ability to tell a tale is fantastic Di, you create such pictures its makes you feel like your actually there!

I have to admit the only ones I hate are the ones that have been stopped so that you have to use them like stairs....my brain and legs just refuse to work together to get up them.
Thanks for the chuckle Di.
Hugs,
A x

That's my day off to a good start. A dose of laughter from you is just what I needed to get me 'up and running'. I'm glad I'm not the only one who still hates getting off an escalator in case I haven't timed it right, though the worst bit for me is getting on to a long 'down' one. It takes me several steps to get balanced. I've never experienced any incidents like you have so I don't know why they make me so nervous.
Thanks for making me smile. Kate x

Hiliarious Di . . . I laughed out loud in the office when I read about the first escapade . . . and then sniggered through the rest!

Thanks for the giggle.

Me too, me too. I hate those things. Refuse to use the walkways in the airports. I have to leave a big gap between the person in front of me on an escalator so that I have room to leap off the other end. Won't even get on one if I'm wearing sandals.just thinkin go the what might happen is giving me a funny turn. Gotta go lie down for a bit or I know a drinkie poo would be better. cheers Mrs A.
p.s. Vets just rang and said Wrapper is ready. I really do need a drink now.

Thanks for a good laugh on this sunny, but windy, Tuesday. I don't like the moving walkways that go up a slope - always end up nearly going over backwards and having to grab my hubby (good excuse!). Ali x

Never used to bother me but it seems that a fear of many things have crept upon me as I have lots more birthdays.

Tee hee Di .. .. you should have filmed them all .. .. you could have made a fortune from the TV bloopers programmes!!!!

You describe everything so well that I can imagine each scenario perfectly.

Hope you have had a good day.

I'm with you on those Moving Stairs....I don't move so well on them, I think I just Stare at them. Is it trifocals or is it my lack of coordination. I don't know, but I do the jump too. And when I'm dragging a suitcase, I do the jump, drag and pray move. I'm glad I am not alone....