Final up cycled robins - for now!

I've come to the end of my pile of robin die cuts, made from the fronts of shop bought cards, sent to us in 2021: 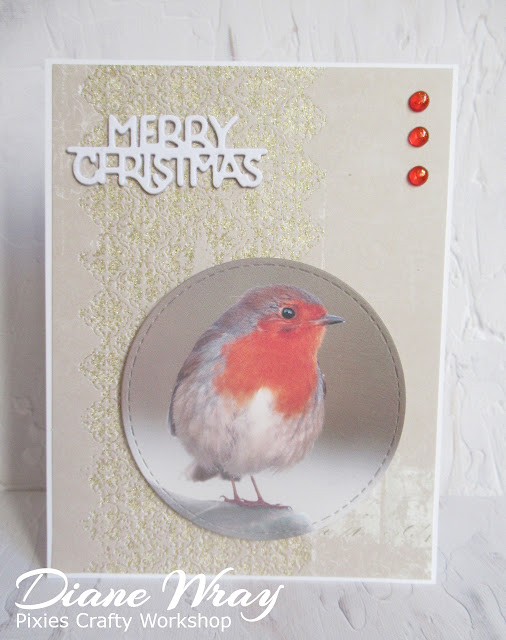 - a sheet of paper from First Edition's 'Gilded Wonder' paper pad, trimmed to just a little less then the card front and glued in place

- hunted high and low for some sort of card, any card, to die cut a sentiment to go with the robin or even the beautifully flittered gold panel on the sheet of paper - zilch!

- in the end I die cut three layers from the same snippet of white card that I cut the card blank from, using my current favourite Tonic Studios 'Mini Moments Merry Christmas' die

- glued the sentiment layers together then added them to the card front - using a glue pen. Top left to make the most of the flittered gold design on the paper

- hmm, not quite right as there was a blank taupe space top right looking very lonely and out of balance, so I walked away and left it - whilst we bathed Dudley on Monday afternoon in fact

- whilst fighting the 'Dudley tidal wave', I remembered some NBUS self adhesive Memory Box Open Studio 'Christmas Fairy Crystals' sitting in the front of a basket waiting for their first outing. And sure enough, one of the orangey red shades works perfectly with the robin's red breast - so I stuck three onto the top right hand corner

Finished! A super fast card to make - but hunting for the backing paper etc. probably took several times as long as actually making the card.

Fighting Dudley was a slight exaggeration really - I brushed, combed and snipped some bits before his shower/bath. Bless his heart, when I sit at the table in Len's room to groom Dudley, he (Dudley!) snuggles his muzzle with a resigned sigh into my cleavage for comfort! As if to say, 'you win'. And he didn't fight too hard this time during his shower. He was then wrapped up like a wet white burrito on my lap - where we patted him as dry as possible before the manic 'zoomies' began!

The little Fairy Crystals were having their first outing so I'd like to enter this into Darnell's NBUS#41 Challenge.

Also, entering the current Christmas Kickstart Challenge#65 - 'Never in a Nativity'. My second robin card for this fun challenge!

And, for the time being, we have a lovely white and very fluffy Havanese called Dudley here! He's working hard on trying to remain chilled, hunting out cool spots on tiled floors around the house etc. Yesterday, Len went round to a neighbours' with some wrongly delivered mail. Whilst there, he played with their - much friendlier than Teddy the Terror - little girlie Shih Tzu. She's adorable, they both are, but Tinkerbelle (named by their little girl, what else) is the more friendly. When Len came home. Dudley went ballistic - 'Sniff, sniff - how DARE you play with another pooch'! I was waving his calcium bone treat at the time - but did he care, as he would usually launch into the real need for his midday treat - NOPE?! Just shows that the smell of a lady dog will beat a treat hands down!

It's so very hot here though and in the UK we aren't geared up for it with air con. and such so we're all struggling.

Anyhow, the results of our previous 'Christmas in July' Snippets Challenge, run by Sarn, can be found HERE.

Numbers are low on my/our current Snippets Challenge - I can't blame you with the heat that so many of us are trying to cope with! It's a nice prize, so do come and play!

Love from Di and Dudley - no more 'Phantom Piddler' puddles from him, thankfully!