New challenge open over at the new Snippets Playground!

This is my snippets card: 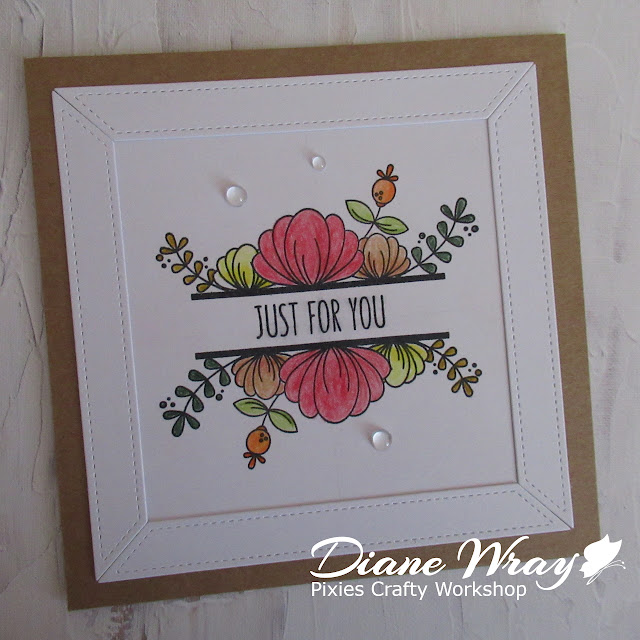 - added the sentiment, from the same stamp set

- coloured the image using Faber-Castell Polychromos pencils, using later Summer to Autumn colours to tone in with the kraft card

- glued the background image onto the card front

- then glued the frame pieces in place - see note below

- added three clear 'raindrops' from Lucy's Little Things - using Cosmic Shimmer glue - I recently decided to try the glue again after early failures and found it perfect for attaching little 'doo-dads', as Darnell would say. I should have persevered with the first bottle I had quite a few years ago - and that was SaRn I think who recommended it! Basically I think I snipped too much from the applicator back than - now I just have a bead topped pin stick in the very teeny, tiny hole in the new bottle to keep it airtight

The stamping took a fair bit of measuring and lining up with the aid of the Misti as the set comes with just the one floral image which you need to flip the other way round and stamp twice for my chosen design - but when it worked perfectly (with the aid of a grid lined piece of acrylic) I sure was a happy bunny! The real secret is to line up the ends of the lines underneath the 'Floral Vine' stamp - not the centre flower as I was tempted to do.

The frame dies are such a great idea - no doubt I spotted one of you Playmates using them at some point last year - I've had mine for a few months waiting to be used. The set comes with six different lengths of the corner ended dies, certainly in two, perhaps three, different widths/thicknesses but I don't want to unearth my own set again and cut more die cuts to prove it. So, you can make square frames or mix two different lengths of dies to make rectangular frames. Very clever, although it already seems to be discontinued over at Clearly Besotted, sigh. Whisper, other companies also sell similar sets - including Ali Express.

I did have to juggle around a bit with the frame pieces, purely because if anyone can attach stuff on the 'wonk' it's me. So, I flipped the pieces over and attached a narrow strip of sellotape across each corner before adding some glue and then 'going for it'! That allowed me some 'wiggle room'. ☺ And another tip - do check that your chosen frame will work with the size of image you want to use. I almost slipped up on that one early on in the process!

Do hop over to the Snippets Playground and see what this fortnight's prize is if you like this card. And you can also enter just for the fun of it as well!

I'd like to enter my card into Darnell's NBUS February Challenge #35 - HERE.